By all rights, I should be a horror writer.
When I was a kid, I read everything. I don’t remember any titles in particular that stood out for me, but I read just about everything I could get my hands on. I even read some of the Ramona the Pest books, even though they were supposed to be for girls! (Or so we thought. I’ll add that I read a few of the Henry Huggins books, and didn’t like them as much as the Ramona books; on the other hand, I loved the Hardy Boys, but wouldn’t touch Nancy Drew) As I got older, I was drawn to horror. It’s not unusual for kids of a certain age; I’ve seen my own kids go through this, too. I was fascinated with monster and horror movies, and wanted to watch them, even though they sometimes gave me nightmares (just seeing commercials for The Exorcist on TV scared the hell out of me). And, around the same time, I was introduced to Stephen King.
My parents weren’t overly fussy about what I read, and did not object when I read Salem’s Lot at age eleven. King became my favorite author, and he still holds that distinction. I devoured his new books, re-read his old ones, and was inevitably disappointed by the movie treatments they received.
My first forays into ‘serious’ writing were horror. Not a surprise, I guess, considering the direction of my movie and reading interests.
So, I should be a horror writer. Yet, I’m not.
Two weeks ago, at my writer’s group, I took a prompt and wrote the beginning of a short story about a woman who comes home and finds her husband has been replaced by an exact duplicate. When I ran out of writing time she was fumbling with the lock on her front door, trying to get out. It’s good, if I do say so myself. The tension builds nicely, and it’s got a real nice ‘creep factor.’ I like it, and would like to finish it.
One of the members of the group noted that I write a lot of horror-type things, and it’s true. I would say most of what I’ve written in my Writer’s Group is either outright horror or suspense, but they’re all shorts. Furthermore, of the short stories I’ve written over the last year or so, almost all of them are horror/paranormal/suspense. As for novels, I have four in various stages of drafting. Not one of them is horror, not even close (horrible, maybe, but not horror).
I have a theory, of sorts, on why I haven’t written any lengthy horror. But first a brief digression, if you don’t mind.
When I was under thirty and still fairly athletic (i.e., many years ago), I cracked three ribs while playing hockey. “Not much we can do about it,” ER doc said. “Take Tylenol for pain, and breathe as deeply as you can. It’ll take about six weeks to heal.”
Everything was painful: sitting, standing, walking, going to the bathroom, breathing. My biggest fear, however, was the prospect of coughing or sneezing. There is no way to cough or sneeze gently, and trying to suppress one often makes you feel like your chest is going to explode.
I needn’t have worried. During the time of greatest pain, and, indeed, for several weeks, my body did none of those things. Not a sneeze, not a cough, not a single hiccup. Not until I was probably four or five weeks into the recovery process, when the pain was a thing of the past, did any one of these common body functions occur. It was as if some internal Scotty crawled through the brain and activated the Sneeze Override Protocols. Good work, Scotty. 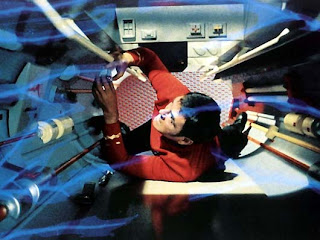 To write good novel of any genre, you need to maintain tension. That’s Basic Writing 101 right there. Yet it seems to me that horror requires an extra level. You still have to create good, well-rounded characters. You still have to describe your scenes and put your details in the right places. And now you have to add in a monster, or a demon, or a ghost, some terrifying something that menaces the people of your world. It has to be believable enough for people continue reading, and it has to spread that tension out in just the right amounts throughout the story.
I’m still new to this writing game. I’m still learning. I don’t think I have the chops at this point to maintain the kind of tension needed for a full-length horror novel. I can do it over a couple of thousand words, but not over the 75-100K required for a novel, there’s just too much needed. On some level, my brain knows that I’m just not up to that, yet. Mr. Scott has pulled the wires from the Novel-Length Horror Control Panel so the monsters can only come out to play in the short works. Or maybe I just haven’t dug up the right monster yet. Time will tell. Have a pleasant weekend, all.