Thanks to Lisa L. Regan for tagging me in this ‘Ten Things’ thing going around. You’ve done me a solid, Lisa: now I don’t have to scramble for a Monday topic, and, given my weekend, that’s a blessing. It also fits rather well with what I’m planning for Friday (and have been planning for a while, just haven’t finished). This has been an exhausting weekend that has seen me helping haul giant pumpkins around as part of Cooperstown’s annual Pumpkinfest. I’m tired, sore and sunburned, and had very little time to think over the weekend.

So, ten things you don’t know about me, in no particular order of importance:

1. Bobby Orr is my all-time favorite hockey player. He’s the reason I’m a Bruins fan, and the reason I played defense (though no one ever made a highlight film of me).

2. My favorite season is whatever season it is when you ask me that question.

3. My mustache has been trimmed, but never shaved. Ever.

4. I’ve been footed by a Great Horned owl and bitten by a Bobcat.

5. Between 1981 and 1992 I saw the Grateful Dead more than 30 times in concert, though I never dropped out of life and went ‘on tour’, earning a living by selling tie-dyed t-shirts like some people.

6. As a kid I loved Bozo the Clown, yet I was afraid of clowns. Bozo came to a Playworld store (chain long since defunct) when I was young; I lurked and looked at him from around a corner or from a very long way away, but didn’t go to meet him.

7. Two years ago, I paddled a giant pumpkin in Otsego Lake as part of the Cooperstown Pumpkinfest. It’s hell on the knees, but a lot of fun (no paddling this year, sadly). That’s me on the left side. I didn’t get to paddle this year, but I did get to help launch pumpkins. 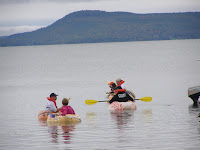 8. Six days before my wedding, I was assaulted at the Lennox Street subway station in New York City. A random guy hit me upside the head with a bottle. I had occasional, mild dizzy spells for over a week. After I went back to work (3 weeks later), it took me probably more than a month before I had the courage to use that subway station again.

10. Whenever I eat bacon and eggs, I have to have a glass of orange juice.

And there you have it. Let’s see, I’m supposed to tag a couple of people, so let’s hit Jennifer at the Writing Cocoon, and Donna K. Weaver at Weaving a Tale or Two, and Robin, at Bends in the Writer’s Road—I don’t recall seeing this particular tag circulate on either of your blogs before. And don’t feel pressured: if you don’t want to do this, don’t! See you on Friday, when my muscles are less sore and I’ve got something else for you.