About a week ago, Nancy Thompson wrote on her blog about…well, blogging, and how tiring it had become. She started her blog because she’d read that it was important for writers to ‘establish a platform’, and blogging was a means of doing that. But the blog thing is wearing her down, and Nancy finds herself yearning for the days when she could just write her book in blissful ignorance of this whole ‘platform’ thing. Nancy wondered if it was that important, given how much time the whole blog thing took, both in terms of crafting her own posts, and visiting and commenting on other blogs all the time. In the comments section, I suggested that platform-building was perhaps not as important for fiction writers as for non-fiction writers, and that she should really concentrate on her fiction writing.

In the simplest terms, a platform is permission. It’s the right to speak to a group about a certain topic. And there’s nothing necessarily wrong with wanting that.

If you have something worth saying, you want people to hear it. A platform amplifies and legitimizes your message. It gives you authority to influence.

And that’s pretty much how I understood it when I first came across the phrase. ‘Platform’ is an author’s expertise, her credentials, her bona fides, her credibility. When viewed this way, it’s understandable why I would think it applies to non-fiction, not fiction. You won’t buy a book on fish biology by Luca Brasi simply because his author bio reads, “Luca Brasi sleeps with the fishes.” 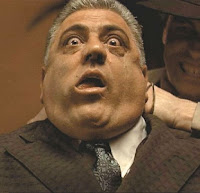 You might pick it up and look inside to see if it was a joke, but if you were serious about learning about fish biology, you’d put it down and pick up something by a guy with a Master’s in Icthyology. Lee Iacocca has credibility when it comes to management strategy or the auto industry. Neil Armstrong has a platform on the space industry. The cast of “Jersey Shore” has a platform on…well, whatever it is they actually do. I might be able to write a non-fiction book on GM or NASA or tanning, but one look at my biography, and an editor would probably say, “Why should I believe anything you say about this subject?” I’d have to write one hell of a book to get a look, and rightly so.

I thought expertise could help for fiction, but that it wasn’t necessary. If I were to write a series of books about a New York City detective, an agent/author/reader might give me more weight if my bio said “Jeff O’Handley was on the NYPD for thirty years.” Reading that, you might figure that I could capture a lot of the gritty details of police work, along with the culture of the NYPD. If you were in a book shop and saw two detective novels side-by-side and could only buy one, would it really matter that much to you that one is written by a retired detective and the other wasn’t? That ‘platform’ might account for a few sales here and there, but it probably wouldn’t make that much of a difference in the grand scheme of things. The key for fiction, I thought, is a good story, written well, that finds its way into the right hands at the right time. Platform? That’s for the non-fiction writers, right? That’s what I thought, anyway.

“It’s the way you, the author, will get your name and your book in front of potential consumers. It’s the way you will bring sales to the table. It’s a group of people who are likely to buy your book, if you should ever publish one, because they already know of you and they like something about you.”

Huh. Thirty-something years later, Fonzie still can’t say it, but I can: I was wrong. And so I apologize to Nancy and anyone who read my comments and thought, “Cool! Jeff says I don’t have to worry about platform!”

This new definition of platform certainly makes sense, given the way the world—and the world of publishing—has changed in the last 20 or so years.

Think about it: Agents and editors assume a huge risk when taking on a client or a project. Most of us authors have a source of income aside from writing. We pour a lot of ourselves into our books, and lay ourselves on the line, but unless we’ve quit our day jobs to become authors, the only risks we take when we query are to our egos, and our hopes and dreams (not that that’s a small thing). The agents do a lot of free work on our behalf in the hopes of a big payday. It’s entirely possible they will flog your book—talking you up at meetings and conferences, writing queries (do they call them queries when they come from agents?), shopping you around–for a year or more and not get any takers. No sale means no income. Publishers, meanwhile, lay out actual cash in the hopes that your book does well enough to at least break even. They assume a huge risk in offering a contract, with no guarantee that your book is going to earn back the advance, let alone all the other costs associated with getting it published and out there. It’s natural they’d want to hedge their bets, and I guess they look at an author with a blog-following, tweet-hanging, facebook-friending army of a few thousand as less of a risk than someone like me. After all, an author with a few thousand blog followers is going to sell books to at least some of them, right? And a lot of those followers have blogs of their own, with followers of their own, and word will get around and make that book into a best-seller. It makes more sense than taking a chance on someone like me who has 15 followers and a whopping 140 blog hits a month (I’m not entirely sure this line of thinking is totally accurate, but that’s a subject for another day, because this post is already too long, and it’s all speculation; I have not platform).

But Rachelle’s piece also speaks to another question, one that was just asked of me this week by a fellow blogger and reader of a portion of my manuscript, and one that I’ve been avoiding as I write: who is my audience? Are you, my dear 15 followers, the true audience of my WiP, or anything else that I’ll write down the road? Or is it someone else? And if you’re not, should I aim my blog at them? I’m afraid to say I haven’t really answered the audience question, but I’ll have to address it by the time I’m ready for the query process. In the meantime, I’ll keep working on my book, and blogging the way I do. But I’ll be thinking….

Have a nice weekend, all.