A few weeks back, we had a conversation at the dinner table about…something, I don’t really remember what it was. Books, movies, maybe something else, I don’t really remember. What I do remember is I reached for a phrase, one that the writers among my readers are probably familiar with (and maybe everyone, I’m not sure): Suspension of disbelief. I reached for the phrase, but what came out of my mouth instead was ‘belief’, as in “suspend our belief” I’m not sure why it came out the way it did, except that it seemed exactly right at the time.

The very next day I saw this phrase in a comment on someone else’s blog: “but it certainly requires some suspension of disbelief.” Funny that this popped up less than 24 hours after I butchered the phrase. It made me think about it again. And, turtle that I am, here it is, a month later, and I’m finally posting something about it.

According to history as told by Wikipedia (suspect though it may be), and Bartleby’s familiar quotations, the phrase was coined by Samuel Taylor Coleridge back in 1817:

“It was agreed, that my endeavors should be directed to persons and characters supernatural, or at least romantic, yet so as to transfer from our inward nature a human interest and a semblance of truth sufficient to procure for these shadows of imagination that willing suspension of disbelief for the moment, which constitutes poetic faith.”

Wait, what did he say?

Let’s see. If I read a book that involves a magic carpet, what am I suspending to enjoy? As far as I know, carpets can’t fly, they can’t be imbued with a magical energy that lifts them off the ground and renders them capable of flight. So, I suppose I don’t believe in flying carpets, thus I’m suspending my disbelief. ‘Suspending my disbelief’ is, therefore, the correct expression.

But wait! Carpets can’t fly! To believe that a carpet can fly, I must suspend my belief in the world I know, in order to pretend to believe in something else. So, maybe I am suspending my belief after all.

My head hurts. I believe it’s time for another cup of coffee.

My wife returned from her trip to visit her brother. She did not bring my book back. I think she tossed it out somewhere on the Pennsylvania Turnpike. Seriously, it’s now in the hands of my sister-in-law (hmm, she’s married to my brother-in-law, so does that make her my sister-in-law, in-law?), who is an avid reader. Once my wife had read it, I found it was easier to leave it with another person that I know. I am relieved that my wife liked it, and that she didn’t come home giving me this look: 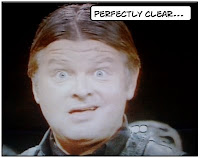 I have to have a serious conversation with her about it now, though, see if I can tease out of her anything that was wrong beyond the page of spelling errors and typos that she e-mailed me.

It’s been a relief, I have to say, having it out of my hands, and my head. I’m nervously awaiting an unbiased opinion, but that was one big hurdle crossed.