I sometimes think of my brain as being like one of these big, old Victorian houses. The kind of house that has rooms off of rooms, nooks and crannies everywhere, and a surprise around every corner. I love houses like that; they fascinate me, and the brain is every bit as complicated as some of those houses. For the purposes of this post, we’ll simplify things and talk about it in terms of front room and back room.
Most Victorian houses had a nice little parlor. This was on the front of the house, and was where guests were entertained. Someone drops by to visit and they’re ushered into the parlor, where you sit with them in overstuffed armchairs with lacy doily-things covering the arms, and there are lamps with tasseled shades, and dark, striped wallpaper. You sit in the chairs for a while and you visit and eat finger sandwiches and have a cup of tea, and it’s all very pleasant.
When the visit is over, your guest doesn’t say goodbye and go back out through the front door, however; they take the OTHER DOOR.
These old houses are full of doors, but this one is different. Instead of a nice, solid door with a fancy brass knob, it’s a shabby-looking curtain. Occasionally, a breeze stirs the curtain but you can’t really see what’s back there, because it’s dark. All you can see are shapes, some moving, some not, and sometimes, you hear things…and they don’t always sound pleasant.
Your guest says, “See you later, it’s been fun” and wanders off through that curtain, and you sit up in the front room and look out the big windows at the world and go on with your business.
But while you’re looking out that front window and entertaining more guests in the front room, and watching things happening in the world through the big bay window, there’s some sort of party going on in the back room the whole time. You don’t know what the hell is going on back there, and most of the time, you don’t care.
Until something pops out, and it looks like this: 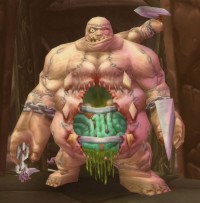 It’s pretty horrible, but if you’re lucky, it’s just perfect for a story.
Very few of my story ideas arrive in the parlor via the front door. On very rare occasions, something happens that is Just Exactly Right, and I’m off and writing. Far more often, things come into the parlor, spend some time with me, and then go off into the back room. There, it spends weeks or months while I think it over. The funny thing is, that thought goes on behind the curtain. I not even aware I’m doing it. The book I’m working on now, which was last year’s NaNo revived, is a product of many months in that back room. It started with an incident two Novembers ago, when an insurance SNAFU got my car towed and nearly got my wife arrested. At the time, I was also watching a lot of the HBO series Oz. For several weeks, I entertained the insurance issue in the front room of my brain, trying to get something out of it. At that time, the writing bug was starting for me, but hadn’t really kicked in yet. I tried to pull an idea out of this, and failed. So, after a while, I said goodbye to the incident and it went back through the curtain.
Fast forward to the following spring. As I drove into town one fine morning, I saw a good-sized Snapping turtle sitting on the roadside, presumably off on her way to lay eggs somewhere. BANG (and this is why that other room needs a door – it’s far more dramatic  for an idea to kick the door open with a house-shaking BANG than it is to fling back a curtain in a whisper of fabric). Just like that, Oz and the insurance incident popped out of that back room, almost unrecognizable. They/it melded with the turtle, and became The Idea. The rest of the way into town, narrative filled my head., and I suspect I was quite guilty of driving on autopilot.
The turtle was a catalyst of sorts. I’m not sure if the other two thoughts had spent the winter cozying up in  that back room and had already merged into some form, and just needed the turtle to complete the reaction, or if it was an instantaneous combination of the three ingredients. I’ve had this happen several times, where something seen, heard, or read right now triggers some reaction among things that you’d forgotten about. Regardless of how it works, I have to say, I love those moments.
Have a pleasant weekend, all.