Happy Anniversary to Me!

Eight years ago, my family and I movedto our current abode here in the frequently-frozen hills of central New York. A couple-three weeks (as they say up here) after that we had a chimney sweep come in. We wanted to use the fireplace (it was March, and still cold), but had no idea how long it had been since it had been used, and we were concerned that there might be creosote build up or animals living up there (amusing side note: the following summer, we had Chimney swifts move in. Several nights running we heard twittering from the chimney in the middle of the night. The cats found this quite intriguing).
The chimney sweep was a rather engaging guy, and we had a lot of fun talking to him. While discussing some of the work that needed to be done on the house, he gave us this bit of friendly advice: “You have to be careful up here. Anyone who can use a hammer calls himself a contractor.” 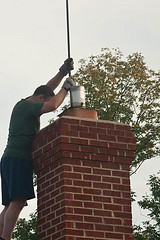 There are laws governing contractors, and plumbers, and electricians, etc., etc. But there are no laws governing writers. We could change the sweep’s words: “Anyone who can string two sentences together calls himself a writer.” Hey, look at that: I’m a writer! And so are you!
But we usually don’t do that, do we? I think most of us don’t consider ourselves writers until we get an agent, get published, get paid to write, or can make a living from it. I’ve been published – I had an article on Turkey vultures appear in our weekly newspaper a few years back, and last year I had an article on the environmental benefits of local foods printed in a guide to the local farmers’ market. Two short stories ran in Time Frame (but I know those don’t count, officially). I’ve also been paid specifically to write: I have a couple of trail guides to my credit somewhere out there, which theoretically makes (or made) me a professional writer.
Yet I wouldn’t tell people, “I’m a writer.”
I think of the Chimney sweep’s words now because today, December 6, 2011, marks an anniversary of sorts. One year ago today I sat down and committed the ink to paper (okay, cyber ink to cyber paper) of what is currently-known as Parallel Lives. As I look back on it, this date feels important to me. Even though I had been dabbling since the spring of 2010, getting a couple of thousand words down on two different novels, entering short stories in two contests, and even completing NaNoWriMo, it felt like dabbling. On December 6, 2010, some sort of switch was flipped inside of me, and I went from I’m-just-goofing-around-here to I’m-not-kidding-anymore. I can’t put my finger on it exactly, but there was something about that day that was different. And I didn’t know it at the time, really; like many important dates in history, you don’t always recognize its importance while it’s happening. You need time and perspective. As I look over the last year, I do realize that something happened to me in that time, something has made me more serious about this, and it centers on this date.
I realize how presumptuous it sounds, to say “I’m a writer.” I have no agent. I’m not ready to query, but I’m closer. And, despite the fact that I’m not really hiding it from anyone, I’m not exactly running around telling all my friends and relations, “I’m a writer!” But I’m becoming more comfortable telling people that I am writing. So, I’ll say it: “I’m a writer.”
Wow. That felt kind of good.
Since this is an anniversary, have a piece of cake. 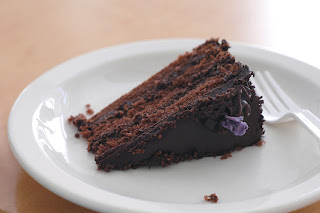 When did you feel like you were a writer? Was there a specific date or event that occurred that made you say, “Today, I became a writer?” Or is my ego running suddenly out of control?

EDIT: Erm ahem. Big time apology incoming. At the dinner table this evening, it was pointed out to me that today, Tuesday, is December 6. My anniversary is December 6. Somehow, I became convinced that yesterday (Monday) was the sixth, thus my post was one day early. So, I’ll just give my piece of cake over to someone else and have a bit of crow, thanks.
Oh, what the hell, I’ll celebrate twice.