Happy Monday. I’m sitting here waiting for the coffee to hit my system. No formal post this morning, so just some rambles off the top of my still-not-very-awake head.

My writer’s circle met three hours earlier than usual yesterday. I’m not sure if it was the change in time that did it, or something else, but it was a disaster for me. How bad was it? I changed pens in an effort to spark something – and wrote about it. My best line of the day: “He touched the match to the corner of his notebook and let the night take all his thoughts away.” That shows you where my brain was at yesterday.

I was feeling fine yesterday, too, until I left my writer’s group. I had to stop at the store for a few items. By the time I was done, I felt like I’d been run over by a truck. Totally exhausted, and with a back ache. I don’t feel sick, exactly, but I feel worn out. Blah. 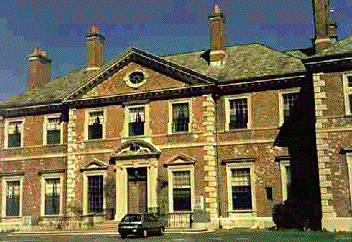 During the weekend I finally started reading The Great Gatsby. For whatever reason, my teacher never had us read that one (we also didn’t read any Dickens, or The Catcher in the Rye – that’s another one I’ve got to get one of these days). I remember kids complaining about Gatsby, but so far, I’m loving it. Unfortunately, I can’t get the image of Robert Redford out of my head as Gatsby, even though I never actually saw that movie. As you may recall from an earlier post, I used to live in this building, which was the summer home of Marshall Field, III, and was part of that whole Long Island Gold Coast scene depicted so vividly in Gatsby.

Last week I made some headway on revisions to Parallel Lives, and made a lot of headway on the new, still untitled WiP. It’s very strange, thinking in terms of a ‘new WiP’. And I’ve thought a lot about the things you all have said (I Need to Know) relating to the new WiP. I’m still skirting that issue.

That’s about all I’ve got for today. The coffee’s kicking in, but the body still isn’t feeling so hot. Blah, again. I’ll leave you with this rather subdued bit from Jimi Hendrix, one of my favorites, and rather appropriate given my mood today (3 and a half minutes).

Have a great week, see y’all on Friday.