One day Allen Foster and his friends Billy Jorgenson, Laura Cummings, and Mary Sandoff were driving to Centerpoint when Billy said, “We’re almost out of gas.” “Oh, great!” Allen said with a look of disgust on his face. “We’ll be stuck out here in the middle of nowhere! The next town is nearly 15 miles from here!” “Well we’ll just have to hoof it,” said Mary. “I’m not walking 15 miles,” retored Allen. “Stop the car Billy I’m going to see if there’s any gasoline in the trunk.”

Oh, dear God, I don’t think I can do it. I don’t want to write it, you don’t want to read it.
Okay, that’s a lie on both counts. We’re writers. We’re maybe not as egomaniacal as some of the performers who strutted before the cameras at last night’s Grammy Awards, but we do love to talk about ourselves, and we also love to hear how others got started. So, while there is some truly cringeworthy stuff ahead of you, I’ll plow on, and so will you, because today is the OriginsBlogfest, so here is my Origins Blogfest tale. 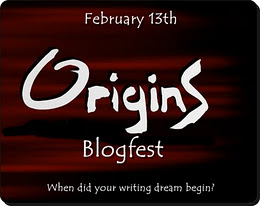 Edit because I’m an idiot: I forgot to say that Origins is co-hosted by DL Hammons, Katie Mills, Matthew MacNish, and Alex J. Cavanaugh. Thank you for hosting this great event, it’s been great fun to read so many stories!

If you’ve been reading this blog for a while you know I’ve talked about this before. But since I don’t tag my posts (idiot that I am) I don’t have an easy way to go and find where I’ve  referenced this before. So here it comes again. The words quoted at the top of this post are mine. They are the opening lines to my Epic Story, “The House of Evil.”

I wrote this story in 6th grade, and it’s the first piece I remember writing. I’m sure I wrote stories before that, but it’s the first notable one – it’s also the earliest example of my writing that has been preserved for posteriority. I found it while sorting through my parents’ possessions, shook my head at the thought that they saved it, and probably did a bit of laughing and crying over that fact.
Kids – especially kids who love to read, and I was one of them – love to create stories, so I’m sure I wrote noteworthy stories before committing The House of Evil to paper, but Brady Bunch scripts written with my sister and comics poking fun at a chinless kid who lived down the block that my brother and I did don’t really count. I’m sure I wrote some actual stories, but I don’t remember any of them at all until October 22, 1976. That was the day Mrs. Fucile, my favorite teacher, ever, posted a picture on the blackboard and told us to write a short story. The picture was of an old Victorian house. In my words:

The house was a large one about 3 stories with a small cupola at the top. It was very old. You could by the fact that the shutters swung on rusty hinges and the shingles were broken or chipped. All the trees were bare and ready for winter. The lawn looked like a garden of weeds.

Okay, maybe that’s not so bad. I like the ‘garden of weeds,’ actually. I’m not sure, but I might have actually used that recently. I’m plagiarizing myself.
The story is an interesting mix of ‘sensibilities’, I guess you’d say. There’s definitely the little kid-like, Scooby-doo feel to the piece: Four friends who, in my mind, were of college age driving in a car, stumble into trouble. But unlike Scooby-doo, there’s no solving this mystery. Unlike Scooby-doo, people really get hurt. Unlike Scooby-doo, there is no happy ending. There’s a bit of Stephen King-horror (and, interestingly in my mind, the ‘monsters’ in this story are human – there is no Lovecraftian, tentacled thing from the depths of hell here – the evil in question comes from humans. For all the horror King penned, the worst stuff in his stories was always what people did to other people) here. This story, I think, represents some of the earliest steps of my mind into the adult world.
There’s all kinds of influences evident in the story. Aside from the horror elements I was a huge fan of science fiction stories and B-movies. I had read Salem’s Lot earlier in the year – a good deal of my thoughts on this house came, no doubt, from the Marsten House in that book. I loved loved loved all things The Phantom of the Opera, hence the kids find a massive pipe organ in this apparently-abandoned house.

“So what’s so strange about a pipe organ?” asked Billy. “You mean you didn’t notice? Take a look around the rest of the room. Everything else is covered in dust except for this! It looks as though someone has been playing it.”

Hmm, I was at times strangely good about not using dialogue tags for every line, but I sure as heck didn’t know to put each new speaker on a new line. Good to see I’ve learned something.
Alas, for our heroes, the sound of the organ “found it’s way to the sub-basement where a doctor unknown to them was working.” This would be the obligatory hidden basement laboratory of Evil Scientist Dr. McKinley and his assistant (hunchbacked, no doubt), Adrian (I may have read or watched Rosemary’s Baby sometime that year, now that I think about it). Hearing the organ, the doc dials up a monitor and sees the four ‘kids’ in the house:

“I can’t continue my experiments with these people here,” he said angrily. “Wait a minute,” he said suddenly. “The one on the left would be good for my experiment. I want him and him only.” “What should I do with the others?” Asked Adrian. “I have no need for the others, you shall have to kill them. Now let’s get ready for the trip, I want shovels and flashlights.”

The mishmash continues. There’s grave robbing, and a set of experiments not unlike Doctor Frankenstein’s – only in this case, Doc McKinley is trying to paste a living mind into a dead body, which he will then reanimate. There’s booby-traps, a shovel to the head of the cop who could have stopped it all, remote-controlled suits of armor. In many ways, the story resembles the teen slasher flicks (minus the sex and drugs) that were still a couple of years off. Kids split up? One of them dies. Potential savior who can stop everything? He gets poleaxed with a shovel. I was ahead of my time, I guess.
I was also ahead of the class. I don’t remember any other stories coming close to mine in either length or content. It apparently wowed most everybody when it was read aloud, though I spent those 20 minutes or so inspecting every inch of the surface of my desk, afraid to look up. Afterwards, however, there seemed to be a definite change in tone of the short stories we continued to write. I’m sure it would have happened anyway, as we were all growing up and entering a new phase of our lives, but mine came first, so I’ll claim some significance. It seemed to loosen something up in the class, and that future stories – and we did a number of them that year – of my classmates were longer, and darker, too. In all honesty it probably would have happened anyway. I’m not going to overinflate my importance in this, kids of a certain age start to deal with the morbid. I was just the first in my class to have it so out there. I’d like to think it served as a good example, even if it was bad writing.
In hindsight, it wasn’t the best story I wrote that year. In addition to predating the teen slasher flick, I also wrote Toy Story (oh, heck, people have been writing about toys that come to life forever, who am I kidding?), and that one, I think, was better than this one (unfortunately, it does not survive). What The House of Evil did for me, though, was make me want to write. I’d never considered it as a possibility before. That picture, that house, just lit something up inside me.
Thank you for reading, see you on Friday.