Donna K. Weaver tagged me this weekend. Not oly did she tag me, she had the decency to notify me ahead of time that I had been tagged, AND gave me the taggy question things in advance. Now, with the Origins blogfest last week and the 11 Questions thing the week before, I admit I’m a little crispy around the edges. A New Year’s Resolution to be more involved in bloggy festival kinds of things will only take you so far when you’re crispy around the edges.

But I promised to take a look and I did, and I got hung up on the question #1:

If Abe Lincoln and George Washington got in a fight, who would win–and why?

This question took me way back in time. In an earlier phase of my life I worked at an environmental education center. We worked with a lot of kids from New York City, and we also worked with animals, such as hawks and owls, lizards, snakes and such. And it seemed that, whenever we did these programs, some kid would raise his hand (it was almost always a boy) and ask, “If you put the hawk and the owl (or substitute any combination of animals from the program) together and they fought, who would win?” I never thought I’d see this question applied to two of our greatest Presidents.

I gave it a great deal of thought, and my first reaction was Lincoln, because of his tremendous wingspan. Even though George was a man of strategy, a man who fought and defeated the greatest military force in the world, I thought he’d have trouble getting inside the big man’s reach. And I figured that Lincoln had to be pretty strong, too. I mean, we’ve all heard the tales of his youthful days splitting logs, right?

So it looked like Lincoln. But then something popped into my brain, something also from the past. When I was in college, I had a roommate who was big into martial arts films. And the biggest martial arts star ever, before Jet Li and Jackie Chan and Chuck Norris, was Bruce Lee. The Dragon. And in one of the oddest sights I have ever seen, Lee, who was maybe 5’6” after a really good morning stretch, mixed it up with 7 foot, 2 inch basketball legend Kareem Abdul Jabbar in the movie Game of Death: 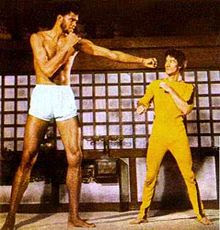 This is the image that kept running around and around in my brain as I tried to answer the question. That is what I saw for poor George going against Lincoln. What hope is there against that kind of reach? And yet, the five minute fight scene (you can see it here) gave me the answer: In a fight between Abe Lincoln and George Washington, George wins. Because George is Bruce Freakin’ Lee to Lincoln’s Jabbar, and nobody beats Bruce Lee. Sorry, Abe. And sorry, Donna, because that’s about as far as I got, even with the weekend lead time.