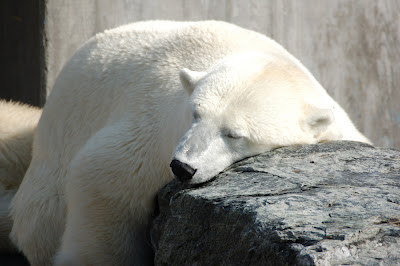 That about sums up how I’m feeling right now. On several occasions in my life I’ve had the pleasure of working the Graveyard Shift. Working overnights can really screw around with your body, and there are some interesting physiological reactions that occur in the depths of the night when your body’s natural clock is telling you to go into shut-down mode and your brain is saying “Must. Stay. Awake!”

But the body can get used to it, and if you can go home in the morning and get some solid sleep you’re usually good to go. It’s the interrupted sleep that’s the problem.

Last night the Catbird went to see the premiere of The Hunger Games with a friend. Showtime: 12:01 AM Friday morning (right, she left last night. Technically the movie was this morning). Her friend’s mother gave her a ride and sat in the car in the parking lot reading, snoozing, whatever-ing. I went to bed shortly after 11, read for about half an hour (current read: The Corrections, Jonathan Franzen) and set the alarm for 2:30. I figured I’d get up, wait for the Catbird, then get back to bed.

At the appointed hour I woke and stumbled downstairs to find The Wife up (still) watching TV. “I didn’t know you were planning to stay up,” I said, because I didn’t think she could stay up that late. “I wasn’t intending to,” she said. “Want to wait with me?”

I’ve been married long enough to know that the correct answer to this question is “yes”, but I also know that, as The One Who Gets Up First the only logical answer was “no.” There was a time when I would have stayed up, but she had it covered. I went back to bed. About thirty minutes later The Wife came to bed, I asked her if the Catbird liked the movie, and I went back to sleep.

That interruption, all of ten, fifteen minutes in the middle of my sleep cycle, was enough to leave me a bleary mess this morning. The honest truth is I felt a lot like I did when I had a hangover: stuffy, headachy, slow of finger and thought. The only good thing is I didn’t have the extra stinky breath or the spins. I think that Sleep, Interrupted is worse than No Sleep. Meanwhile, the Catbird got up much easier than expected this morning. It will be interesting to see how she looks at the end of the day, after a full day of school and track practice on all of 4 hours of sleep. It will be more interesting to hear what she thought of the movie. She didn’t have too much to say about it this morning, but she’s glad she went. Any of you see it yet?

On a writing note I’ve spent all week working on the Hydra: the dreaded combination of Agent Lists, query development and synopsizing. As Tom Petty said (in Yer So Bad), “I can’t decide which is worse.” I’ve worked on all three at different times as I wrote, but now things are serious. The good thing is I’ve got my top ten agents down for the first batch of queries. Now I’m wrestling with the requirements: “Query + synopsis” says one agent. “Submit your query via the online form” says another. “Submit a cover letter plus first three chapters.” Wow, what a chore, and very critical to get right.

Of all the steps involved in getting published, this may be the toughest (at least so far, hah hah). I thought writing the book was hard. At times it was. At other times it was glorious, exhilarating, a thrill ride. But now? The synopsis is tough, possibly tougher than the query letter. I’ve found it’s easier to boil my novel down into three paragraphs and maintain a shred of Voice in a query letter than it is to summarize what happens for the synopsis and not have it sound like The Epic (you remember me writing about The Epic, don’t you?). Something about the synopsis just seems to suck the soul right out of my writing. I’d be tempted to skip it altogether and submit to agents who don’t ask for one, but there are two problems with this approach: first, some of the agents I really like ask for one. Second, you know I’d get at least one asking for me to submit a synopsis. And then I’d have to do it anyway, under extreme pressure. Then again, maybe extreme pressure is the way to go with this…..

That’s about it for me, hope you all have a good weekend.