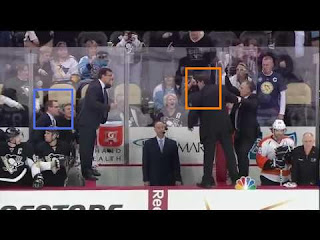 On April Fools’ Day, appropriately enough, I watched the Pittsburgh Penguins and Philadelphia Flyers square off in a heated late-season game with playoff implications. It got ugly, to the point where Flyers coach, Peter Laviolette (in the orange box) had to be restrained by his assistant, Craig Berube (and if you watched Berube play, you know how ironic it is that he’s holding anyone back). The object of his ire was Dan Bylsma, Pittsburgh‘s coach. Bylsma, in the blue box, remained behind the bench, safely protected by Tony Granato, who is standing on the boards opposite Laviolette.
Late game shenanigans is not unusual between these two teams, especially not when they’re looking at a first round playoff matchup starting in a week. Messages have to be sent, after all. The unusual thing was what NBC Sports personality Mike Milbury said the next day:

“I thought Dan Bylsma should have taken off his skirt and gone over there.”

Actually, this is not that unusual, not for Milbury, not for the sports world. Milbury was a hard-nosed player, and he’s an emotional guy with strong opinions who gets easily wound up, which is part of why he gets paid (probably handsomely) by NBC. He’s clumsy and awkward when asked to analyze a defensive zone breakdown that leads to a goal, but he’s fun when asked about officiating, or a suspension, or a team reacted to the rough stuff. This year, with the league supposedly cracking down on hits to the head and dangerous hits from behind, Milbury railed against the “pansification” and “wussification” of the league. Yes, he really did use those words on air. During last year’s Stanley Cup final he referred to Vancouver’s Daniel and Henrik Sedin as “Thelma and Louise” because they didn’t fight back when the Bruins roughed them up (and this shows how much Milbury knows about Thelma and Louise – if Brad Marchand had tried this on either Thelma or Louise, they would have taken care of him, big time). I’m also pretty sure I’ve heard him refer to Daniel and Henrik as ‘The Sedin Sisters’, an insult which is more commonly heard in sports bars and read in the comments section of hockey blogs, where everyone also insists on calling Penguins superstar Sidney Crosby “Cindy” (hey, Carrie did that on Monday, didn’t she?). 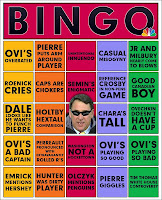 Milbury’s statements started something ticking in my head. And a week or so later, the ticking got louder, courtesy of the the Washington Capitals-centric hockey blog, Russian Machine Never Breaks. They created an NBC Bingo game for the first game of the Caps-Bruins series. Note that one square in the top row: Casual Misogyny. If it’s getting a square on the Bingo board, it must be getting some serious air, and I started to wonder about it. By the way, that’s Milbury in the middle, the free square.
We might be able to excuse Milbury. He’s a polarizing figure, paid more for his opinions than for analysis. The interview where he called out Bylsma was for a Philadelphia-area radio station, and I wouldn’t be at all surprised to learn that he was at least in part playing to his audience. But can we forgive this item that came from The Chicago Tribune two years ago, when the Blackhawks played the Flyers in the Cup final? 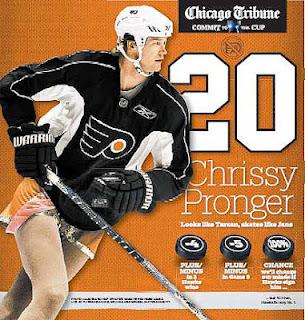 Is this appropriate journalism? I’m sure the editors would say “It’s all in fun” but what message is it sending, and to whom? Calling opponents girly names is a long-standing tradition in sports. These are things that are often said in the heat of battle on the field, ice or court, and I doubt it bothers most of the players. I’m pretty sure Chris Pronger laughed this off when he saw it. When I played sports, it never bothered me. But when sports journalists throw this stuff around so easily, I have to wonder how it effects women and girls.
Well, maybe I got a hint of this. Last week, Puck Daddy  pointed me to this post on The Active Stick. This is the blog of a female hockey fan, and here’s what she had to say about this:

If you’re a woman, and you call him Cindy Crosby, or you call them the Sedin Sisters … do you know what you’re doing? You are calling someone female to insult them. You are using yourself as an insult. Have a little more respect for yourself.
If you’re a man, and you make Cindy/Sedin Sisters jokes at me to make me laugh, do you know what you are doing? You are using me as an insult. Why would I find that funny?

For another opinion, I went to The Wife. She wasn’t too fazed by any of it, and is of the opinion that some people are maybe too sensitive. And that pretty well jibes with my own feelings – I think, quite often, there are people out there who are looking to be offended, and that we should all have a little more sense of humor. But then again, I have to consider this: I am a man. I am a white man. And I’m not especially religious. It’s easy, being in my position, to say, “Eh, so what? Laugh it off.” But at the same time, I think maybe it’s time to bring this sort of thing under control. Maybe it’s time to put a stop to it.

I’ve gone on too long for today. Next week I will actually look at a writing connection to this. In the meantime, I’d really like to hear what all of you have to say. I know most of my followers are female, so let me ask you: Do you think the Casual Misogyny tossed around by Mike Milbury (and others; I don’t mean to pick on Milbury, I actually like him) is something to shrug off, or is it a real problem? All opinions are welcome, I just ask that you keep it civil (which I don’t expect to be a problem). Have a great weekend, and thanks for stopping by and sharing.