As you undoubtedly know, the wonderful Angela Ackerman and Becca Puglisi of The Bookshelf Muse have been hosting a week-long event to celebrate the release of The Emotion Thesaurus: A Writer’s Guide to Character Expression. They’ve been running giveaways all week, including a companion guide to the thesaurus, available as a free download. Best of all, they’re encouraging RAOK (sounds like something a crow would say, doesn’t it?), Random Acts of Kindness. The idea behind the RAOK Blitz is to celebrate the people who help us as writers – be they critique partners, industry insiders, readers, blog visitors, etc., etc. 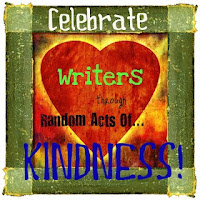 Now, I believe I should be BLITZING a writerly-type of person, and there are indeed many people I could do this for, but if you’ve been hanging around my little corner of the Blogoverse at all, you know I play fast and loose with te rules when it comes to memes and fests and tags and whatnot. I’ll catch up to you deserving folks another time, just know that, if you’ve helped me in any way at all, I do appreciate it, and I am thinking of you. The person I’m going to BLITZ is not an industry insider, fellow writer or blogger. She’s not really a critique partner, either, though she has read my work and cheered me on. But she’s the most important person in my life, and that would be The Wife.

The Wife has been supportive and encouraging. She believes in me. The hardest thing I ever did was turn over my manuscript to her (how hard? I gave it to her as she was about to leave home for a week to go help her brother and his wife with their newly-arrived triplets). I guess I was afraid she would read it, look at me, and say, “That’s what you’ve been wasting your time with all year?” or something like that. Actually, I knew she wouldn’t say that, but I was afraid she might think it. I have grown a lot in confidence since then, in no small part to her (and others who could easily be recognized here today). She has encouraged me, she talks me up more as a writer than I do, she’s been a rock. So, to The Wife, I say, “Thank you.” As for what the Random Act of Kindness will be—well, we’ll keep that between us.

On another note. Two weeks ago, I did a second ‘Origins‘ story of sorts. I mentioned the game B-17 and how the stories I wrote about my fictional crewmen seemed to lead to Something Bad happening in the game, generally involving fatal wounds to the men, or the entire plane getting shot down. Well, maybe that streak is still alive. Last week’s post about being stuck in the middle with no end in sight? Or, rather, with the end in sight but no sense of actual movement? I had a nice little exchange with Donna K. Weaver. She asked me a couple of questions, I gave her a couple of answers. Lo and behold, the problem soon went away. I sat down on Monday and actually thought about possible endings. “This can happen, or this can happen, or maybe that can happen.” It was actually sort of like–gasp–outlining! I picked one and started writing. By the end of my writing day I had ‘the climax’, the final confrontation, and it looked tenable. On Tuesday I cranked out a ridiculous 5,551 words—I kid you not; I’m not sure how I did it, because it didn’t feel like I wrote any longer than normal—and realized I had done it. The tail of the book is perhaps a little long, but it is, basically, done. Not ready for public (or beta) consumption yet–I did a scan of it yesterday, resequenced scenes and made notes on what needs filling out, but the story is there, a complete story, and it even has a title (not ready to share that one yet, either. It reminds me too much of an old Star Trek episode, and it’s really not right, but it works for now). So, thank you, Donna, because you must have given me just enough of a push to get things going.

And thank all of you. The First Loves Blogfest was fun, it brought a lot of visitors here, and I’ve been struggling to visit as many sites as I can. RAOK has been enjoyable, and now there are even more blogs to catch. At least I can take a day from the manuscript and catch up a bit. Have a great weekend!