A (Blurry) Glimpse Into My Notebook

I do most of my writing on my computer. I love it. I love the click of the keys, and the way they feel beneath my fingers (I can’t type on my wife’s keyboard; the keys are stiffer and sound ‘clackier’. Blech). I love watching words appear on screen as if by magic.

But every Sunday I get together for what’s supposed to be two hours and is often more like three, with a group of writers. We socialize a bit, read from some sort of a prompt, and free write for forty-five minutes or more. When we’re done, we share what we’ve done and talk about it. It’s not a critique group, exactly, it’s pretty soft in that regard, but it’s fun, and it’s practice, and every so often, I come up with something I really, really like. But that’s another story.

I use a black-and-white composition notebook for this. I like it, quite a bit. It’s a nice change of pace from sitting at a computer, and sometimes, if I’m really, really stuck when writing at the computer, I’ll take up the pen and notebook and hand write. The change of pace is often just what I need to get unstuck, for some reason. Trying to read my work, however, can be hazardous. Aside from my poor penmanship (and, if I recall, that was always one of my lowest grades back in elementary school), I have a tendency to do stuff like this: 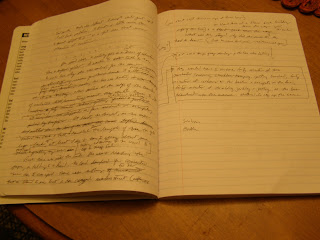 Crummy images, I realize, and I apologize. You don’t get the full sense of how much has been crossed out or moved.

It’s especially difficult to read to a group of people when you have to follow an arrow around to the backside of the page. Sometimes I use numbers to help me keep track of where I need to go, sometimes I don’t. The funny thing is, when I’m in a heavy writing session, I don’t edit quite as much as I do at the writer’s group. And some pieces at writer’s group get far less editing than these two pieces. I think sometimes I just fizzle out early and run out of material to dump on the page. That’s when I go back and start playing.

Oddly enough, looking at my notebook, with its cross-outs and its arrows and the occasional margin notes of WTF??? and STUPID reminds me of how much I love the process of writing, of how fun it can be. Maybe part of why I like hard copies so much is because of the reminder of where I’ve been, and what it takes to get a ‘finished’ product. The notebook – or any hard copy that’s been edited – is like a road map of thought, and I think that’s pretty cool.

Do you use a notebook, or write exclusively on computer? Ever have trouble following your self-edits?

+++++++
American Thanksgiving is this week.  I have much to be thankful for this year, and am looking forward to the Magpie’s long weekend home (not her first time back since August; we brought her home for a short stay a week and a half ago so she could see the school musical; we kept it secret from the Catbird, and man, the look on her face was priceless when she saw her big sister). For all of you, be safe and be well, and happy Thanksgiving to those of you who celebrate!