Well, I figure I woke up and found the world still here this morning, so it’s going to be a good day. Christmas is nearly upon us (and from the looks of things, we may have snow on the ground for it for the first time in a couple of years), the Magpie is now home, and I’m pleased to be hosting my friend and newly-published author, Lisa L. Regan here today. Lisa’s debut novel, Finding Claire Fletcher, was released to the world on December 6th, from Sapphire Star Publishing Company. 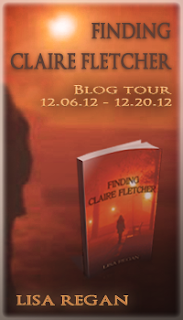 I’m not sure if I found Lisa’s blog before she found mine, but I remember liking her style right away. She was immediately relatable. After lots of commenting back and forth, Lisa very graciously offered to read the manuscript for Parallel Lives. She’s given me great advice on PL and a few other things, and has been sympathetic and supportive when I get grumbly or insecure. I confess I haven’t read Finding Claire Fletcher in its entirety yet. The Wife has it on her phone and she won’t let me read it until she’s done. She’s enjoying it quite a bit so far, but life and Christmas and all that is slowing her down madly, and she won’t let me have it until she’s finished first. I’m going to have to start stealing it from her in the middle of the night. However, what I have read is compelling, and I’ve also had the pleasure of reading the first chapter or so of an upcoming Lisa Regan work. Good stuff, folks. Anyway, Lisa graciously offered to answer a few questions for us, so here we go.
First, Lisa, you’ve been an officially published author now for a couple of weeks. How does it feel?
It’s weird, but in a really fabulous way.  The first few days are really crazy.  There were so many messages via email and social media–people sending congrats and kind words.  It was amazing.  At one point, my phone actually just froze.  It was really incredible though.  Then things settled down and now, in some ways, it’s like nothing has changed at all.  I go to work, take care of my family, the days are the same.  But then I’ll get a message from someone via Facebook or email saying they just finished my book and it was awesome.  Then I’m like oh, right, my book is out there for anyone to read, and I’m completely euphoric!
Okay, we’ve all seen the bio, now tell us something about yourself we WON’T learn from reading your ‘About Me’ page.
One of my favorite things in the world is “tv show night” with my husband.  Depending on the time of year, we’ll choose a TV show that we’re going to watch together and that day of the week becomes a kind of at-home date night.  We watched both seasons of Game of Thrones.  We just finished watching the last season of Boardwalk Empire.  It’s just fun to cozy up with some snacks and be absorbed into a great story line together.  Then we talk about it, make predictions, etc.  If one of us can’t be home the night a new episode is on, we tape it and save it until we can both watch it together.  No show-cheating allowed!
That’s a very nice way to spend some time together, and I love that you make sure to talk about it, too. I love origins stories. Tell us about the origins of Finding Claire Fletcher. How did it come about?
I’ve been obsessed with missing children ever since I was 11 and Jacob Wetterling went missing in Minnesota. [Jeffo’s note: Wetterling went missing in 1989] That case really captured the attention of the entire country.  I never forgot it.  On the anniversaries of his abduction, the media would put out age progression photos.  I kept thinking, “I bet someone in this country has run into him and didn’t even know it.”  The idea of a random encounter with a missing or abducted person was the premise for FCF.  It just didn’t turn into a book until 2004 when I started writing FCF.

The idea for the premise was there for years—at least a decade.  In 2004, I was trying to get back on the horse as they say and start a new novel.  I had written an adult novel before that, but it was terrible.  So I was playing around with different projects and premises at that time, trying to find something to write.  Then the first line of the book popped into my head:  “First time in a bar?”  It’s actually the first line of chapter 2 now.  I sat down in my writing chair with a notebook and wrote the first 65 pages of the book in one sitting.  I knew there was a man and a woman in a bar and that the woman had said that line.  It just came out.  Just like that.  I didn’t even have character names.  When I finished, I knew that this was the story I need to write next.

It’s funny how an idea–a good idea–can float around in your head for so long before it’s ‘ready’ to be written, and funny how the tiniest thing can trigger it. Has the story changed from your initial vision?

In some ways, it hasn’t changed at all, and in others, it’s changed dramatically.  The parts that are almost exactly the same as the day I hand wrote them in my many notebooks are the sections from Claire’s point of view.  Very, very, very little changed in those sections—the ones told in her voice—from the first draft to finished product.  This has always been her story, and my initial vision of it and the telling of it hasn’t changed at all from start to finish.  What did change dramatically was the plot of the second half of the book.  Originally the book went much farther into the future than it does now.  Also my bad guy was far more maniacal in the second half of the book than he is now.  Finally, the pacing is a lot different.  I originally had Claire’s story framed by Connor’s search, and now I have the chapters staggered. I think it adds suspense.

These days I am much more of a plotter.  Although I had the best time writing I’ve ever had writing Finding Claire Fletcher, forging ahead with no plan at all really crippled me in terms of seeking publication.  It took a very long time to get the book to where it is now.  I think if I had plotted more ahead of time, my journey would have been easier.  So now I begin with a premise in mind, character names, a loose idea of the plot and then I write a few thousand words.  Then I do a plot outline from there and continue writing.  I will reference and change the plot outline as I move along, depending on what twists the actual writing takes.  But now I try to start out by asking myself:  “What am I trying to accomplish in this book?”
We often hear about ‘saggy middles’ and writers who get 10, 20, 30,000 words into a book and then get lost and discouraged. Did you ever hit a point during the writing of FCF where you thought about throwing in the towel and giving up? What kept you going?
Never in the actual writing of it.  The book came out of me fast and furious.  I couldn’t get it out fast enough.  I was so sad when that first draft was over.  During the lengthy, prolonged, painful revisions there were many times I wanted to throw in the towel.  But Claire’s voice was too compelling to me. She felt so real, and I was haunted by her voice, her story.  I felt some weird sort of obligation to her to see this thing through.
Describe your writing routine, if you have any. Are you a morning writer, evening? Anytime?

I have none!  I keep a notebook in my purse and whenever I have time (waiting in line at the post office or in a store, waiting at the doctor or dentist, waiting in the car while my husband runs into a store) I will write.  I try to always have whatever I’m working on in the back of my mind so that when I do get ten minutes to pick up a pen, I can get right into it.  Then usually at night when my daughter is asleep and my husband has fallen asleep watching TV, I will pull out the old laptop and work on there.  I just grab whatever free time I can get wherever I have it and use that.  Some of my best work has been written in line at the post office.
What’s next for Lisa L. Regan? Do you see yourself continuing in the same genre, or changing things up?

I will definitely continue in the crime fiction/suspense/mystery/thriller genre.  This is what I love.  My new novel, Aberration will be out 6/6/13 from Sapphire Star Publishing.  It’s got an FBI agent.  Then after that will be a Philadelphia detective.  Then I’d like to bring Connor and Claire back as minor characters or intrepid crime solvers in a book with a mystery at its heart.

Wow, thanks so much for being here, and good luck with all of your projects. Merry Christmas, too!

About Finding Claire Fletcher
Newly divorced and with his career in jeopardy, Detective Connor Parks takes solace in the arms of a beautiful woman he meets at a bar. The next morning, Claire Fletcher is gone, leaving nothing behind but an address and a decade-old mystery. The address leads to the Fletcher family home where Claire’s siblings inform Connor that their fifteen-year-old sister was abducted from a city street ten years ago and is presumed dead. During those ten years, Claire endured the cruel torture and depravity of the man who abducted her. Paralyzed by fear and too ashamed to return to her family, Claire is resigned to her life as Lynn, the identity her abductor forced upon her. Every time she attempts escape or betrays him in the smallest way, someone dies. Even now, her clandestine run-in with Connor Parks may have put his life at risk, as well as the lives of her family. Connor is convinced that not only is Claire Fletcher alive, but that she is also the woman he met at the bar. Driven to see her again, he begins his own investigation, off the clock and without the police department’s consent. He is determined to find her and unravel the mystery of her abduction and odd reemergence. But finding Claire Fletcher proves more dangerous than he anticipates. In fact, it may be deadly.

WHERE TO FIND IT