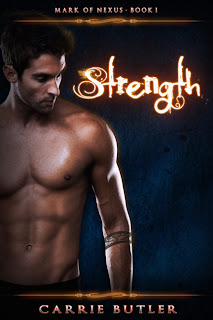 I’m pleased to have Carrie Butler with us today. Carrie was one of my first followers, and her blog, So, You’re A Writer, has long-been a place I go to learn and laugh—and, on occasion, talk about hockey. Carrie just joined the ranks of the published with her New Adult Paranormal Romance, Strength, featuring me on the cover!* Welcome, Carrie!

So, Carrie, tell us something about yourself that we won’t learn from your “About Me” page.
Hmm… well, here’s something random: I’m saving up to buy a new bow. I did a little recreational archery in high school, but that was years ago. I’d love to pick it up again.

Resists urge to compare Carrie to Katniss. I understand you specialized in marketing in college. What did you learn during your years of study that prepared you for being a debut author?
My background in marketing has taught me to present myself in a consistent manner. I try to use the same “voice,” fonts, and colors everywhere that I frequent. It helps build recognition. 🙂

You’re quite the champion of the New Adult category that seems to be gaining traction in the literary world. Why do you feel we need this new category?
Categories are around to help us find books we may enjoy, based on the stage of life depicted. They give us general expectations (age, voice, themes, etc.), but they don’t dictate content as genres do. That’s why we combine the two to form descriptive labels, i.e. MG adventure, YA thriller, adult romance, etc.

Unfortunately, there is one life stage that has been buried and underrepresented in YA and adult fiction for years—the so-called “college years”. Say you wanted to read a story about a twenty-year-old deploying to Afghanistan, or an eighteen-year-old dropping out of college to start an apprenticeship. Up until a few years ago, that kind of read was all but impossible to find. Why not make it easier?

Because cranky old fuddy-duddies like yours truly get lost in the bookstore as it is, hah hah. Plotter or Wingman?
I’m more of a plotter these days. Scrivener converted me.

I love origins stories. You’re probably tired of this already, but how did Strength come about?
Strength started as a “what if” scenario. What if a unique, supernatural race lived among us? What if there was more than one? How would the world stay in balance?

I listened to music while I plotted out a few points, and the 2005 Five for Fighting cover of “All I Know” came on. The lyrics—the first few lines about bruising each other—really struck me. As I considered them, the figurative meaning morphed into a more literal scenario. How tortured a man with uncontrollable strength must be, falling in love for the first time, unable to touch the woman he loves without hurting her…

Anyway, that’s how the romance element fell into place. 😉

The ‘unable to touch’ part akes me think a little of Pushing Daisies. Some stories change quite a bit in the journey from initial idea to published novel. What kinds of changes, if any, occurred with Strength?
Nothing major. Some scenes were fleshed out, some scenes were cut, and a connection between two characters was severed. That’s about it.

What’s next for Carrie Butler? I see you have a sequel for Strength in the works.
Well, I’m nearly finished with the first draft of the sequel. After it’s cleaned up, it’ll go out to my critique partners. Then I’ll have a series of revisions, beta reads, and edits to look forward to. (I’m sure you know how that is.) (Oh, yes I do!) Finally, I’ll query/submit the manuscript and cross my fingers! 😉

You’ve made the bold (though increasingly common, it seems) decision to publish your first book without an agent. Tell me, if you don’t mind, about your decision to go direct to the publisher, and if you plan to continue working without an agent going forward.
At first, I did query agents, but the timing was off. NA hadn’t become a “thing” yet, so I had to face my share of industry stigma. Requests from the few agents who would consider the category—including one from my dream agency—didn’t end up panning out. Not that I could blame them. NA was a tough sale, at the time.

So, I began to query small presses.

Within twenty-four hours, I had two full requests. One of them turned into an R&R I wasn’t too thrilled about, but the other turned into an offer. An offer! After a little back-and-forth with SSP, I knew I’d found my home. They were hungry, communicative, and excited about Strength. The day I signed my contract, I knew we were in this thing together—and that meant the world to me.

Right now, I don’t mind working without an agent. I’m managing pretty well on my own. But I know my experience and connections are limited. Eventually, I would love to work with someone who really knows this industry. 🙂

Do you write everyday? Do you follow a strict regimen as far as workspace, work time, number of words/hours you put in?
I used to have a routine, and I really wish that were still the case, but Strength’s promotion has thrown me off my game.(I can understand why) I’ve had to write in middle-of-the-night bursts lately. Here, at my desk, until six in the morning—and then I crash.

I do enjoy writing while deliriously tired, though. I’m so free with my words!

I know you’re a big-time hockey fan. Are you excited for the Blue Jackets now that John Davidson has started getting his fingerprints on the team?
Oh, you bet. Davidson is ballsy—can I say that? (you just did)—and that’s exactly what this team needs. He wasn’t afraid to shake things up by canning Howson, and then he brought in his old pal Kekalainen. I love it!

And there you have it–thanks so much, Carrie, for coming by. So, here’s what you need to know about Strength:

When college student Rena Collins finds herself nose-to-chest with the campus outcast, she’s stunned. Wallace Blake is everything she’s ever wanted in a man—except he can’t touch her. His uncontrollable strength, a so-called gift from his bloodline, makes every interaction dangerous. And with a secret, supernatural war brewing among his kind, there’s no time to work it out. To keep Wallace in her life, Rena will have to risk a whole lot more than her heart.

*She had to airbrush out the ‘stache, and airbrush in the tattoo, but clearly that’s me! Really!