Remember that old Paul Simon song, 50 Ways To Leave Your Lover? What’s that, you don’t? Oh, right, of course not, you’re too young. Well, it was  a hit for Simon back in the mid-70s, which is why most of you DON’T remember it, but through the magic of the internet, you can see it here, if you so choose.
One person who probably does remember it is Hall of Fame broadcaster, Mike “Doc” Emrick, the current voice of the National Hockey League during the Stanley Cup Final. While he’s not everyone’s cup of tea, I’ve loved listening to Emrick since I first heard him calling games for ESPN back in the 90s. His love of the game is evident, and he’s one of the most creative souls when it comes to describing the action.
Case in point: during Game 1 of the final between Chicago and Boston last week, Doc used no less than fifty (50!) words to describe a simple action that takes place hundreds of time during a game: the movement of the puck from one player to another, which is typically called “a pass.” Someone kept a list, and here it is: 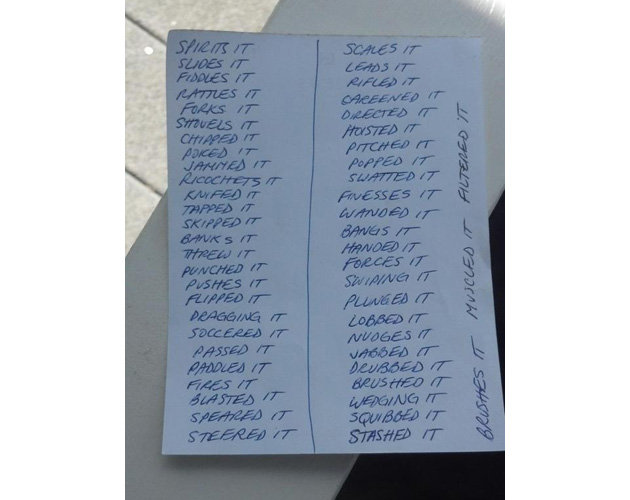 As outlandish as many of Doc’s synonyms look on paper, they are frequently bang-on descriptions for the action. While I’m not entirely sure how you ‘wand’ a frozen disc of rubber, and ‘spirits it’ is a total head-scratcher, most of these really, really work in the course of the action. And this list is not inclusive; this is only what he used in game 1. Doc also has players ‘shillelagh it’ (knocking the puck out of the air), and one of my personal favorites is ‘ladled it’, which occurs when the puck is played softly down the ice.
I’m not sure what’s more amazing, the fact that
a)      Doc has actually come up with so many words to describe a common action;
b)      Doc can actually remember to use these words appropriately while in the midst of describing what can be a ridiculously fast-paced game; or
c)      Someone actually sat down and made this list while the game was going on (I’m guessing the guy had no rooting interest in the game)
Point B is something all of us writers should take into consideration. We’re always looking for new ways to say something, to set us apart from all the other writers out there. There are all kinds of interesting ways to say things, and it’s our job to find them. BUT the key is to make the words sound natural, to fit them into the flow of our writing, to match them to the voices of our characters.
Oh, and of course, someone did a “Doc Emrick 50 Words Mashup“, which is a fun listen. Enjoy, have a great weekend!