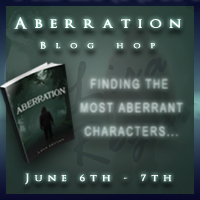 Congratulations to Lisa L. Regan on the arrival of her second book, Aberration, born yesterday to already strong reviews! I’m looking forward to getting hold of this one, it promises to be an enjoyable read, in that strange way that suspense is enjoyable.

Rather than do any sort of blog tour, Lisa decided to do something different: a blog hop. And so we have The Aberration Blog Hop: Finding The Most Aberrant Characters.

Finding the most aberrant character from books, TV and movies is no easy task; there are just so many of them. Those listed below have struck me as particularly aberrant for one reason or another, though I note that, as I’ve been reading other entries, I repeatedly find myself smacking my forehead, saying, “How could I have missed that one?” Like I said, there are a lot of them. And, by the way, it’s funny how we focus so much on the negative side of ‘Aberrant’. There’s a shading of the word as defined that implies ‘aberrant=bad’, though you could make the argument that aberrant is just different, which is why Dana Mason had Forrest Gump on her list. That certainly made me think differently, though I was already committed. Who are they? Here we go (in no particular order):


Annie Wilkes, Misery, by Stephen King. The good news for writer Paul Sheldon—he’s dragged from his wrecked car by a registered nurse who adores his books and is his “number one fan.” The bad news? He’s been dragged from his wrecked car by a registered nurse who adores his books and is his “number one fan.” Annie Wilkes makes all those Goodreads/Amazon review trolls look like Gandhi. Annie is horribly disappointed when she finds Paul kills off her favorite romance heroine in the final installment of his Misery Chastain adventures, and him write a new one, just for her. Along the way, she gets him hooked on painkillers, makes him drink rinsewater, and has lots of fun with sharp objects. What’s most frightening about this book is that, unlike King’s tales of vampires and extraterrestrial spiders disguising themselves as killer clowns, there is nothing paranormal about it. Annie Wilkes could—and probably does—exist.
By the way, if you’re a writer you should read this book, even if you aren’t a King fan. There are loads of interesting ‘writer stuff’ in here, specifically about playing fair and not ‘cheating the reader’. Writers writing about writers often feel self-indulgent. Not this one.
Hannibal Lecter, Red Dragon, Silence of the Lambs, Hannibal, etc., by Thomas Harris. The good doctor is turning up on a lot of these lists, and with good reason. When you watch Anthony Hopkins’ riveting take on Lecter in the film version of Silence of the Lambs, it’s hard to remember that Dr. Lecter was a bit player in terms of ‘page time’ in Red Dragon, Harris’s first book to feature the cannibalistic doctor. Lecter is a terrifying villain because of his intellect and mastery of psychology. He’s also witty, tasteful, classy, and charming in his way, to the point where you can almost forget he eats people. In Red Dragon, he goes out of his way to try to kill Will Graham from behind bars, using the classified ads of a sleazy tabloid to communicate with the serial killer known as The Tooth Fairy.
Roger, Lord of the Flies, by William Golding. Roger is a cruel and sadistic boy, whose impulses to tease, torture, and bully have been kept in check by society. On the island, free of the rules and policing adults, Roger gets his jollies by bullying the ‘littluns’, killing a pig with a very sharp stick, and, eventually, torturing other boys, like Samneric. One of the beautiful things about this book is how so much of the violence is implied. We know what he did to the pig, and where he put that stick. We’re never sure what he does to the other boys, and that’s brilliant storytelling. He is a frightening character, because he makes us wonder about ourselves in the same situation.
Jumping over to movies, we’re going to go with Mr. Blonde, of Quentin Tarantino’s Reservoir Dogs. Michael Madsen’s portrayal of Mr. Blonde, aka Vic Vega, is one of the highlights of Tarantino’s directorial debut. The guy is so cool and collected as he antagonizes his fellow robbers, keeping a “We’re just joking here” gleam in his eyes, yet you know he won’t hesitate to do something awful. And that he does. I’m hearing Stuck in the Middle With You as I write this, and it’s creeping me out. Time to move on.
The Joker, Batman. Sure, it’s easy to point to Heath Ledger’s performance in The Dark Knight as the be-all and end-all performance take on this character, but look at this (listen, too) and tell me this isn’t somehow worse:

(Dis)Honorable mentions: Tyler Durden, Fight Club, by Chuck Palahniuk, George Stark, The Dark Half by Stephen King. Figments of the imagination come to life, these two wreak havoc on their ‘creators’ in often brutal, ways.

Gaear Grimsrud, Fargo. The ‘Big Fella’ knows how to use a wood chipper.

About 80% of the adults in Oliver Twist, by Charles Dickens, but I’ll single out Bill Sikes, the housebreaker. Fagin is nasty and manipulative; Sikes is an out-and-out brute who beats women and children alike.

And one more: Walter White, Breaking Bad. We can sympathize with him early on, but the man shows no remorse, no regard, no thought to the lives he’s likely ruining by making meth. And he’s full of himself. Check out this brilliant clip:

As for my own work, sadly, I don’t deal (so far) with characters like these, for the most part. However, there is a character, Roger Fields, in BARTON’S WOMEN. He’s a bit player who doesn’t figure prominently in the book, but every time I wrote a scene with him in it, I had the creeping feeling that there was something really sleazy about the guy, just waiting to be discovered. And yes, the name choice was deliberate (see entry #3).

Wow, that’s about it for me. What about you? Who’s on YOUR list? Thanks for stopping and reading, thanks to Lisa for coming up with this great idea. Have a great weekend, and congratulations to Lisa for book #2!