I’m really, really bad at self-promotion. Still, I I need to say something about Summer’s Edge and Summer’s Double Edge, the twin anthologies from Elephant’s Bookshelf Press, released earlier this week, one of which includes my short(ish) story, Last Man Standing. Hey, I just did!

First, a big thanks to Matt Sinclair for including the story in Double Edge. Matt made my day when he e-mailed me with his acceptance of Last Man, along with an apology for taking so long. Long? It was two weeks, which is a nanosecond in publishing terms. I’ve gotten used to long waits. A magazine which shall remain nameless has had one of my short stories for over a year!

I was fortunate that I had Last Man in the can, so to speak (yeah, that was me channeling my inner Tobias Fünke),because I don’t write short stories easily, and I probably couldn’t have come up with something good between the call for submissions in January and the April deadline. Last Man’s first draft was written over a three day period in May of 2011, starting with 850 words written on a Sunday afternoon in my writer’s group. Sadly, I don’t know the prompt we used that day, except that it called up some lonely images: “I am the last of my kind,” I wrote in the margin of my notebook. “Passenger pigeon; Dodo; Ivory-billed Woodpecker” (I like birds, and I think there may have been some kind of animal motif in the prompt). Anyway, the idea of being the last something translated into being the last man, the last bachelor in a group of friends, and one thing led to another and…well, you’ll have to find a copy of Double Edge to find out the rest. 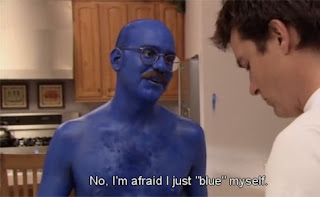 The first draft ended up about 25 pages long. As I said, I don’t do ‘short’ well. I really liked Last Man, and thought it had publication potential, but finding markets for short stories is about as fun as a prostate exam, and I was about to pull PARALLEL LIVES out of the drawer to start reading and revision. Last Man Standingwent into the virtual drawer, a victim of lack of ambition and not enough time.
Flash forward to August, 2012. PARALLEL LIVES was out on query; Draft 1 of BARTON’S WOMEN was in its mandatory six week cooling period. I needed a writing project, but didn’t want to start a new novel (and didn’t have an idea for one, either), so I dug into the ‘bits and pieces’ file on my hard drive—and found Last Man Standing. In the next few weeks it went through roughly six more revisions. In this I was ably assisted by my friends, Nancy S. Thompson and Lisa L. Regan, who provided great criticism, advice, and encouragement, and the fine folks in my writer’s group. What started off as a fragment of a story was now good enough for publication. So I hoped/thought.
Last Man did go to a few markets in the fall, but I was soon elbows deep on BARTON’S WOMEN, and everything else fell  by the wayside. Until I saw Matt’s call for stories that “explore the short-term relationship.” What could be more short-term than a man looking for a one night stand? Happily for me, Matt thought the story worked, and I’m proud to see my work alongside Cat Woods, R.S. Mellette, Jean Oram, and so many other talented writers.
POST SCRIPT: I’m not a big believer in destiny, but when I started Last Man in my writer’s group, I had trouble getting started. In addition to the margin note about being the ‘last of my kind’, I wrote this, right before launching into the story: “The last bachelor. Hunted down. By what? By friends, family, looking to use an elephant gun of love.”
Yeah, ‘elephant gun of love.’ Fortunately, I didn’t use that line in the actual story, or I might not be writing this post today. Still, it’s funny that the story ended up with Elephant’s Bookshelf Press. Have a great weekend, everyone!