Every so often I see a blog post that dovetails nicely with something I’ve been thinking about. When it happens, I usually scrap whatever I was planning to blog about, if indeed I was planning anything. This week was one of those weeks.
On Tuesday, Jemi Fraser wrote about a disappointing experience with an author. Said author wrote a book that was working—things made sense, the story was good, she liked the characters, everything was working.
Until the last page.
What she ended up with was an ending that made no sense, an ending that undid all the work that the author had put in to that point, an ending that left Jemi quite disappointed. Everything she said clicked with something that I’d been musing on all weekend.
The something that started the musing in the first place was the news that the first half of season 5 of Breaking Bad had finally arrived on Netflix (just in time for AMC to begin the show’s final installment of episodes, which started Sunday). I’ve been waiting for this for a while now, because I’m cheap and don’t want to buy DVDs or pay premium rental fees. Anyway, starting Sunday I began watching season 5 and should be caught up pretty soon. (I’d be caught up already, but my wife, who has a hate/hate relationship with the show, can only watch one episode per night. It’s probably better that way.). 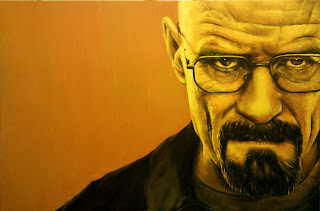 I’ve written here about BB before, about how I think it’s done a brilliant job of characterization and showing, not telling (yeah, it’s a TV show, but it’s still a great example of it). As the end draws closer, I’ve been wondering what kind of conclusion we can expect, and whether it will be a satisfying, fitting end to a great series, or if it will disappoint, like the book Jemi read.
Endings are hard to get right, and they are of critical importance. If your book ends poorly, it can ruin an otherwise-wonderful journey, as Jemi found. It doesn’t have to be a happy ending, but it has to be the right ending. There’s always pressure to get it right, but new writers have a certain advantage: we write our books, especially our first ones, in a vacuum. We write with freedom, unencumbered by anything except our own desires to tell the best story we can. We hope for success, we hope for readership, but when a reader gets your book, the ending has already long-been written, and you’re hopefully already elbows-deep in the next one.
The folks running Breaking Bad, however, have tougher conditions to deal with. Not only do they have to wrap up the series in a way that makes sense within the confines of the world they’ve built, they also have to satisfy a rabid fanbase, and put up with intense media scrutiny. Series finales (and this goes for books and movie franchises as well as TV shows) have become Major Events, hyped up to the nth degree by network PR departments in order to capture as many eyes—and advertising dollars—as possible. The normal, week-to-week show structure is frequently thrown out of whack by having a longer episode. Or turning it into a two-hour movie. Viewers are promised something big and extra special, and it’s often hard for the writers to deliver. (Some have suggested that this is why it seems to be taking George R.R. Martin so long to deliver the final book—or is it two?—to his Song of Ice and Fire series; maybe there’s truth to it, maybe not). Sometimes, the finale lives up to expectations (M*A*S*H); sometimes it falls flat (Seinfield). Sometimes, no one knows what to think (The Sopranos).
I’ve been wondering what kind of end we’ll see for Walter White and the people in his world, and I have no idea what we’re going to get (I have two episodes left in the first half of season five, so please don’t spoil anything for me!). All I hope is that it’s the right ending. It doesn’t have to be big, it doesn’t have to be spectacular, and it doesn’t have to make me feel good (and indeed, it’s really hard to see a ‘feel good’ ending coming out of this series). It just has to be right. I have some ideas in my head about what ‘right’ is for this show, though I’ll keep them to myself for right now.
Have a great weekend, all.
Image by Dwros89, used under Creative Commons license.