IN Honor of the recent airing of the Dr. Who 50th Anniversary special, I’m going back in time. This is what I wrote Saturday morning, November 23 on the calendar for those keeping score at home. It was going to run on Monday, but I had a breakthrough shortly after putting these words to paper, recounted here. So here’s where I was at:

I’m in one of those funny spots. 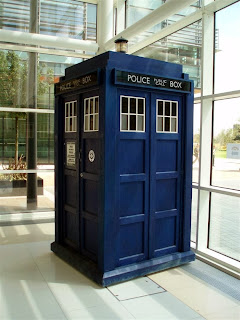 My manuscript is sitting here in front of me, open to page 304. There are 68 printed pages left. I have about 600 words to will add in, something I think will make the ending a little more satisfying. The finish line is in sight. My goal: to start querying, with all the excitement, terror and disappointment that that brings. Also the anticipation and, maybe, relief as well.
And yet….On Thursday night, after chauffering the Catbird and her friend down to a movie, I had time: time to write, time to revise, time to make headway toward my goal of having the manuscript query ready by the end of the month—and I got nothing done. Nada. Zilch. And I came home last night and thought, “It’s Friday, Friday (sing it, everyone); no Saturday morning obligations, I can stay up all night, I can work on this, I can finish it by the end of the weekend.” Instead, we caught up on Revolution (I don’t know if you watch this show or not, but I’m enjoying this season more than last. Last season, there was just a little too much ‘let’s travel incredible distances on foot and somehow make it there before the seasons change’ happening. This season has our heroes mostly concentrated in one place, and I think that’s to the benefit of the program’s believability quotient. But anyway…), and then we watched a couple of episodes of Malcolm inthe Middle, which for my money is still one of the funniest TV shows ever, and I went to bed without working on the manuscript at all. And here I am at 8 AM on Saturday, with no obligations, and I’m writing a blog post. What’s the deal?
Well, I know two deals. One, the section I’m working on is a problem. I’m at the end of Chapter 21, though on my last read through I noted that it probably should be its own chapter. The section needs to be in the book, yet I started retyping the opening paragraph half-a-dozen times, and it just feels—wrong. I can’t put my finger on it. And trying to rework it gave me that itchy feeling inside my head and made me agitated, so I decided to skip it and go watch TV instead. Oh, wait, I actually worked on the query a little bit, but that made my head even worse.
I’ve been here before, and I think my probem is I’m afraid of is the next step. I like this manuscript. I like the story, I like the characters, and I think it’s got potential to sell. But I know that part of the problem is with that potential. Potential. It’s like a rock poised at the top of a hill. Potential. Once I release this thing, once I get the query letter written, once I push the rock at the top of the hill, it no longer has potential. It’s going to roll down the hill. It’s going to smash into things and run over things, but eventually it’s going to come to rest somewhere. It could be in the middle of someone’s living room or backyard. Or it could come to rest in a field somewhere, unnoticed. Or it could roll into a lake and sink to the bottom. It’s a scary place to be, and I know many of you have been there. As long as I keep the manuscript at the top of the hill, it’s got potential. It can be a bestseller. It can be a blockbuster. It can be the next Twilight, I can be the next Stephen King. Once it starts rolling, however….

HEY, TIME JUMP, it’s now Friday morning, November 29, and I realize something: the idea I just expressed in those last couple of lines is bullshit. As long as my manuscript is sitting on my hard drive it’s nothing more than a collection of words. It actually CAN’T be the next Twilight, and I can’t be the next Stephen King unless I put my words out there. It’s a bestseller in my mind only. I want it to be a bestseller, so it’s going to have to get out there. Even then, the chances of it being a bestseller are slim, but I’d rather have the reality than the fantasy.

Have a great weekend, all.