Remember back when I wrote about the impending series finale of Breaking Bad, and how I was afraid of the writers/producers giving in to the hype and screwing things up? No? You can read it here .
Anyway, this is on my mind because of the last two episodes of that fabled show from across the pond, Doctor Who.
Two momentous events happened in the last two months. First, right before Thanksgiving in America, the show celebrated its 50th anniversary with an episode called, “The Day of the Doctor”. A brief round of applause, please. Fifty years for a non-news program or talk show is insanely impressive (and we’ll excuse the 16-year hiatus the show had between 1989 and 2005), and showrunner Stephen Moffat no doubt felt pressured into doing something big. Now, when the episode opened, I had immediate misgivings, as we quickly found ourselves in a long sequence that featured the Eleventh Doctor (Matt Smith) hanging from the TARDIS as it was being dangled beneath a helicopter over London. “Oh, boy,” I thought. “This is going to suck.” It had the feel of BIG TELEVISION EVENT SPECTACULAR! which meant, in my mind, that it was likely to be big on spectacular special effects, guest appearances, and other Cool Stuff, but short on the stuff that makes for a good program: story. 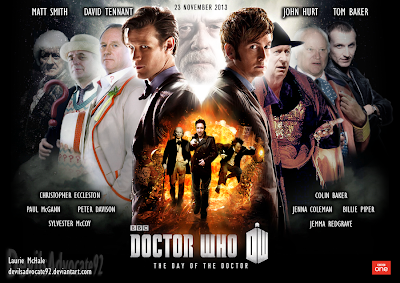 There were indeed some spectacular effects (well, maybe not spectacular; this is Doctor Who, after all, which can be almost as cheesy as original Star Trek), great guest appearances, and other Cool Stuff, and the story was sufficiently big, if not always sensible (this is Doctor Who, after all), but in the end I was quite pleased with the effort. Matt Smith, David Tennant, and John Hurt had great rapport as three versions of the Doctor (and I had forgotten how much I like David Tennant); Billie Piper did a really nice job as The Moment–I’m glad they didn’t decide to simply resurrect her as former companion Rose; and it was great how they found a way to pay homage to all the old Doctors. I do have a major quibble with what I feel is a whitewashing of the Doctor, in a way, but this is not the time or place for that. Again, the episode was enjoyable to watch.
And then there’s the Christmas special. The Christmas special this year was notable for being the final episode for Matt Smith as The Eleventh Doctor, and the introduction of Peter Capaldi as Twelve. Did I enjoy it? Ye-e-s-s. But I also felt that the episode succumbed to the need to make it a BIG TELEVISION EVENT SPECTACULAR! In my mind it suffered seriously from Kitchensinkitis as Moffat threw in everything: Daleks! Cybermen! The crack in the wall from Amy’s bedroom! Weeping Angels! The Silence! Time Lords from another dimension! ***spoiler alert***Amy!***end spoiler*** The problem was, most of these things were there and gone. They didn’t feel like integral parts of the episode’s narrative; rather, they felt like things that were thrown in to make the story feel more Epic. It was mostly enjoyable, but I feel that, in their efforts to make it memorable, they failed to deliver on the promise. It was too crowded with stuff.
Well, I suppose we’ve got a couple of years to think about a proper send-off for Peter Capaldi’s Doctor. Maybe they’ll be able to apply that old principle, “Less is more.”
Did you watch either of the Doctor Who holiday spectaculars? What did you think?