As you’ve been aware, I’ve been somewhat irritable and ranty lately. Oddly, I don’t actually feel quite so cranky this morning (just tired, mostly); nonetheless, this post is likely to come off in a similar vein to recent posts. In this case, it’s the subject matter as opposed to my general mood.

Some items of interest from the week. First, I don’t subscribe (but I should) to Anita Sarkeesian’s Feminist Frequency page, though I should. If you don’t know Sarkeesian, take the time to check her out. She’s been doing a video series examining women in media, particularly with regards to video games that is always thought-provoking, and, often, downright disturbing.

I realized early in the week that I hadn’t checked her page for some time. It’s not uncommon for there to be several months between video releases, and for good reason: each runs about 30 minutes long, are well-researched and are of professional quality. To my pleasure, I found that she had one that had just come out a week or so earlier, and I had missed her previous installment, which came out in June (time flies). However, I also found I had missed this, from a few days earlier. In short, Sarkeesian had received threats that forced her from her home.

Sarkeesian is no stranger to threats. After her Kickstarter campaign to fund her Tropes vs. Women in Video Games series took off in 2012, Sarkeesian was actually the subject of an internet video game herself, in which players could beat up her image. Every installment is met with threats; I can only imagine how bad this must have been to make her leave her home, and once again, it makes me ask: are we still going through this shit? Seriously? Why are guys so threatened by a woman who dares to think and ask questions? Pointing out problems in our society should not unleash an avalanche of threats that include murder, rape and torture. Enough, already.

On a related note, I found myself involved in a Facebook discussion about this article (covering the theft and posting of nude (female) celebrity photos this week), which was posted by one of the Magpie’s friends (hereinafter referred to as the Robin). A young man who graduated with the Magpie (we’ll call him the Roadrunner) commented on the article, arguing that people were dicks, and that separation—physical, socio-economic, class, etc.—facilitated dicky behavior. In essence, his argument was this: 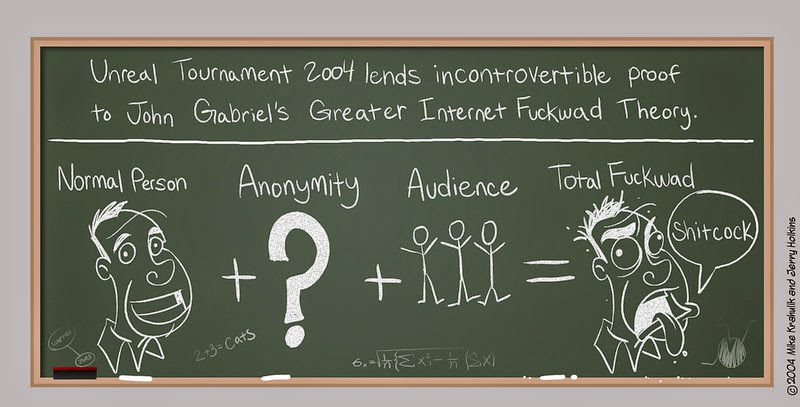 He’s not wrong. Even in places like Facebook, where you may well be using your real name, the layers between people undoubtedly fuel what can only be called douchebaggery. It’s not just the internet, replied the Robin, it’s everywhere, and related how she had been verbally harassed while hiking in a state park that very same day. The Roadrunner suggested the internet was, in essence, a lost cause, that you would not be able to control their behavior, then went on to talk security and how, in essence, we shouldn’t be putting things online because of security. He then compared it to cars of the 1940s, when no one wore seatbelts and there were accidents and asshole drivers. A good try, but he clearly missed the point.

Now, I don’t know the Roadrunner especially well. He wasn’t one of the Magpie’s better friends, but she got on well enough with him, and she never indicated that he was a dick or a tool or anything like that (and to her credit, she has a very low tolerance for those sorts of people). I believe he was both sympathetic and trying to understand, despite his use of the “you have to protect yourself” line and his awkward analogy. It was clear, however, that he just could not understand, likely because: he’s young (19, 20 years old); he’s inexperienced; and he’s a guy.

My own question in response to this was, if we write off the internet, where do we stop? It’s okay to try to stop men from groping women on the subway or bus, or to try to stop them from staring or making rude comments on the street or in the elevator, but we’ll just leave that internet, it’s a lost cause. Oh, and construction sites. Construction workers have been whistling and catcalling forever, we’ll give them a pass, too. Sorry, not good enough. Not when you have a young woman says, “I’d like to think that there is such a thing as ‘safe’ but I certainly have yet to feel that way.”

This must change. I don’t really know how we get it to change, but we just can’t accept this, can’t excuse it as ‘boys being boys’ or write it off as being due to internet anonymity.

Maybe next week I’ll be less ranty. Have a pleasant weekend, all.