It’s funny what happens sometimes when you read other people’s blogs. Earlier this week I was commenting on a post on Krista Van Dolzer’s blog and started thinking, “Hmm,  that can be a post”–and now it is. Whether it should be or not is another question.

Krista was writing about a feeling of “meh”  that has settled in after the high of holding her first published books. Instead of continuing on Cloud 9, all she can muster lately is “a feeling of ho-hum ambivalence.” Says Krista: “I’ve been letting the noise, both good and bad, get under my skin. Reviews have been coming in for the last couple of months, and if they haven’t been awful, they’ve just been all right. (And by “all right,” I mean they haven’t been starred.)”

On a certain level, Krista’s ambivalence is understandable. Life in general is a series of peaks and valleys. It’s almost impossible to live on a continual high (without chemical help, that is). A sugar high is followed by a sugar crash.What Krista is finding is what we all find at one time or another: that this really Great Thing we’ve been waiting for for so long doesn’t really change life a whole lot. Is it great to hold your first ever book? You bet. But you still have to get up and go to work in the morning. You still have to deal with THAT GUY at the office. The car still needs to be fixed. We want to believe that moments like this will change our lives forever, and they do–often, however, it’s not enough of an order of magnitude to impact our day-to-day life.

But I found myself wondering if there was something else behind Krista’s ennui, and I started to think of trees, of all things. At the end of the growing season, deciduous trees (the ones that lose their leaves each year) form what’s called an abscission layer at the border between leaf and twig. As the abscission layer expands, it pushes against the cells on the leaf-side of the border and releases chemicals that help break down the those cells. Eventually, the leaf falls off. 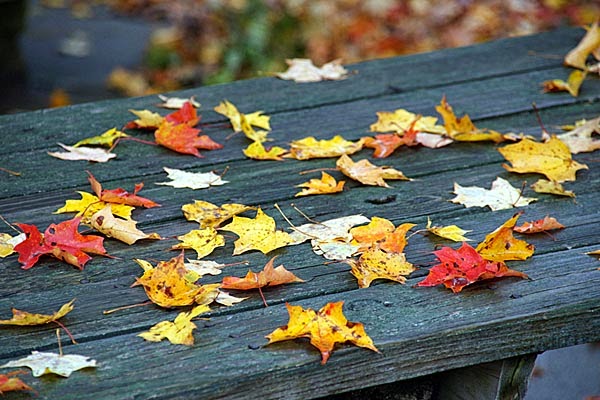 Writers live with their books for a long time. I don’t know how Krista works, but when I write, I’m pretty much on one project at a time, and I’m a slow writer. The story, the characters, the scenes, they’re with me for months, and even when I put something aside to let it ‘rest’ or let my betas have at it, I still often see things that could be different, could be better. “Oh, here’s a new scene I could add at the end of Chapter 12!” You know how it is. Revise, revise and revise, always revise.

Krista’s situation is different, however. Hard copies are printed. Her book is unchangeable. Soon it will be in bookstores and on websites where it can be downloaded to your e-reader immediately, or at your door in a day or two. It’s too late to change. No way to kill off or give birth to a character; no subplots to prune; no ability to put new words in someone’s mouth. And I wonder if her newfound indifference is less a function of reviews and letdowns and more a kind of authorial abscission, a way of hardening yourself to the past so that you can move on to the next one.

What do you all think? Have you experienced something along these lines? Have a great weekend, all!