It is spring. So says the calendar, anyway; the weather is not quite so sure. However, we’ve had a lot of water in the streets and in the creeks this past week, and there is some greenery to be had. The growing season is not quite upon us, but I thought it was time to start The Chestnut Watch.

For those who may be new to this, two years ago I received an American chestnut sapling. I planted it on a nice, open space on my lawn in September. Last spring, I eagerly checked its progress, declared it dead, then was surprised to find that it actually survived. Here’s the first post on the subject, from one year ago tomorrow. It’s too soon to say whether it will ever thrive or not, but it managed to poke some new growth out of an otherwise dead–hmm, not quite sure you could call it a trunk, but we’ll go with it–trunk and put on about 3 fragile inches of new growth. This seemed like a good time to see how it’s doing, so here goes: 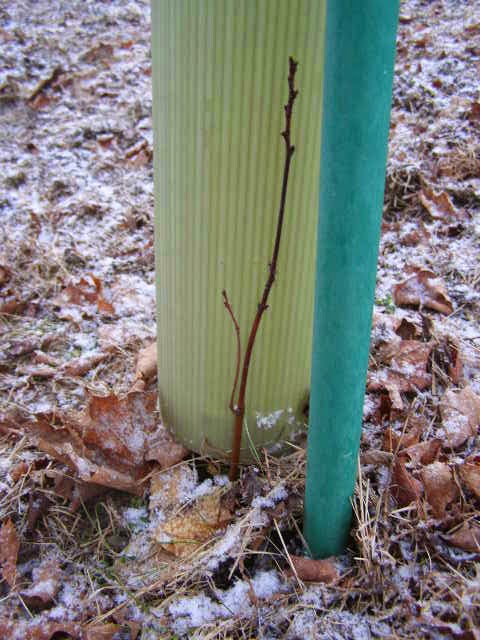 Humble, yes, but I’m hoping this is the year it takes off. That tiny, thread-like bit on the left side of the picture was what grew after I was certain the tree was dead. The tall stem on the right is really most sincerely dead. It’s still living in its translucent, corrugated plastic sleeve. I’m considering swapping that out for a cage made of hardware cloth instead so it can get maybe a little better light. I’m not sure that all day direct light is best for this species.

Oh, and yes, that’s fresh powder on the ground. Winter does not give up easily in this part of the world.

We celebrated a milestone birthday for The Catbird this weekend, and all I will say is “Where did the time go?”

On the writing front, yesterday saw me decide to move ahead with The Next Project while I’m waiting for my betas. I had been kind of stuck, and I think I’m still stuck, so I tried playing around a bit with an outline. This did not answer the lingering question that brought me to a standstill last time, but I did rewrite a new opening. Cheers for new projects.

On the hockey front, my Bruins have now won five in a row (apparently the third time they’ve done that this year). This follows a five game losing streak, which followed a five game winning streak. Making the playoffs seems kind of pointless, as they’re not likely to get out of the first round, but you never know, right?

That’s all I’ve got to say about things. How was your weekend?