I thought this was supposed to be the Information Age.

Last week, I was given what should have been a relatively simple task: find the names of the managers of about forty stores in the county so that we could send a letter about changes in the great state of New York’s recycling laws. A volunteer committee had compiled the list of stores, complete with addresses and phone numbers, but had not progressed beyond that.

Being a part-time resident of the modern age, I thought, “Okay, I’ll google it.” After all, everyone’s got a website, after all, and surely the name of the store manager is something you’d want to be available, right? I figured it would be a bit of a pain in the ass, but that it would not take a whole lot of time in the grand scheme of things.

I was wrong about “everyone’s got a website” and I was wrong about having the names of store managers on those websites. My web search turned up five names: three managed separate stores from a single supermarket chain (which also lists the manager’s name on store receipts). One national home improvement store listed their manager by first name and last initial, only, which means I would have to address his letter as “Dear Mr. M.” One other store listed their manager, but that store is actually part of a franchise owned by someone who is actually local. It took me a while to find this out, and then I spent an hour-and-a-half on the phone, calling every store on my list. I got manager names for about half the stores, grudgingly given out by employees who often sounded too busy to bother talking on the phone.

Whether this obfuscation of managers is done as a deliberate corporate privacy policy or is because they figure managers aren’t likely to stay in those positions that long, and it’s such a hardship to change a name on a website, I don’t know. I do know it was an incredibly frustrating way to spend an afternoon. And more frustrating was when I would tell the employee who answered the phone what I was after and why, and they would insist on putting the manager on. Just give me the name! The managers typically sounded about as pressed for time as anyone else. They really didn’t want to talk about plastic recycling.

I understand why, for example, radio personalities have moved toward giving out their first names only (our local radio personalities include Gomez and Lisa, Big Chuck, and Leslie Ann; I have been on the radio with Big Chuck and Leslie Ann several times (it’s a small pond), have met them face-to-face, and still have no idea who they are). As personalities who reach thousands each day, they stand a better than average chance of attracting unwanted attention than the manager of the local Dollar General. Is it possible that someone’s going to navigate through a web page just to do this?

Maybe. But it seems to me most issues are going to come after someone meets or sees the manager in the store, where their name is likely to be up on the wall, or emblazoned on their chest in hard plastic.

There’s an irony here in a guy who uses his first name only complaining about not being able to find out information about store employees off the web. I get that, I really do, but there’s a difference, I think, between what I do here and those other people. I’m not asking for anything other than a name, and while names have power (as just about every mystical fantasy type of book tells us), I’m not looking for home addresses, personal e-mail, or how many kids they have. Just give me a name.

On an unrelated note, last week I noticed something rather stunning: 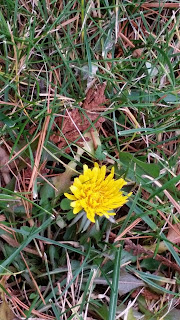 This weekend, we took a drive to do some shopping, and what amazed me was how green the lawns are getting again, and the fact that, here it is, mid-December, and I was able to go out with a light jacket on. I might actually have to get the lawn tractor out before Christmas!

Have a nice week, all.