The blear is strong in me this morning.

I woke up in the dead of night–or morning, technically. 3:22, to be exact. I’m not sure what woke me up: too hot, too cold, fingers falling asleep, spider running across my face, who knows? But I was sure, for just a few seconds, that it was actually Saturday morning, and I was happy.

And then I woke up a little more. Ah, well.

Anyway, if I’m not quite as cohesive as I sometimes am, that’s my excuse.

First things first, Agent Carrie is accepting submissions for her Query Critique contest. Submit a query to Carrie’s contest and, if you’re the lucky winner, she will critique it on her blog. And if you’re really lucky and enough people comment on your query, you can win a critique of your first 100 pages! Go for it! 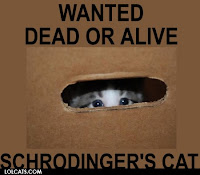 Second things second: I probably shouldn’t talk about this, but last night I sent my current project off to Carrie. It’s that wondrous time of imagination, where anything’s possible: she can tell me “It’s fantastic, I love it, it only needs a few tweaks and it’s ready to go, and I know five editors who will kill for this!” She can tell me, “I really like this a lot!” and send me tons of notes that will have me revising for another five months. Or, it can be, “I like it, but there’s just no way to sell this. What else have you got?” It’s Schrödinger’s Manuscript!

Third things third, it’s Leap Day, but more important than that, it’s the National Hockey League’s trade deadline. I have to say, I kind of hate what this day has come to mean in the NHL. Time was, you made a trade to improve your team. It could be for now, it could be for next year, it could be a little further down the road. Now? It seems it’s all about the salary cap, or all about getting ‘value’ for a player who looks like he’ll walk away as an unrestricted free agent. The fact that the phrase “Hockey Trade,” as in, “It’s a good hockey  trade” has been invented (and is so rarely used) says a lot about the state of the sport.

Time for another cup of coffee. How are you all today?