Crap, here I am, stuck again.

Some time yesterday I had an idea for a blog post, one that was actually about writing. Nothing huge, mind you. The way I envisioned it, it would be short and sweet, a couple of paragraphs at best.

I don’t know what I was doing when it came into my head. I might have been actually writing, or we may have been driving the Magpie to the bus station (she came home for a visit this weekend; it’s good to be a senior with no classes on Friday!), or I may have been doing something else. “I like that,” I thought. “I may have to use that on Monday.”

Except I didn’t write it down.

And so, here we are.

I didn’t watch the Super Bowl last night, but I looked at the boxscore when it was over, took a spin through the ‘play by play’ list, and all I could think was, “Wow, this looks like the most boring Super Bowl ever!” If you watched it, was it as bad as the recap made it look?

A lot is being made over Peyton Manning kissing the Papa John’s pizza guy on TV, and at least twice telling interviewers, “I’m going to drink a lot of Budweisers.” Questions of taste in beer and pizza aside, some vilified Manning for blatant, inappropriate product placement. Seems all the goodwill Peyton garnered for beating Tom Brady and the Patriots was immediately squandered.

I have to wonder, though: is it all that different from “I’m going to Disney World”? Maybe, in the sense that those commercials are commercials, and a post-game press conference or sideline interview isn’t expected to be about product placement, right? 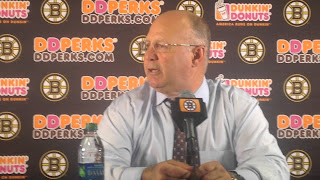 Granted, comparing a hockey coach’s mid-season, post-game interview with a spontaneous, post-game event is a bit of an apples-to-oranges thing. The truth is, just about everything in sports these days, especially the big events, is about advertising and product placement. How many times did the announcers mention that the game was being played in Levi’s Stadium? I’m willing to bet that, just before the opening kickoff, viewers were told that the kickoff was being sponsored by Met Life or Go Daddy or someone. And that half-time show, that was all Pepsi, right?

I wouldn’t be overly upset with Manning. For all we know, he might just equate Budweiser with beer, the way millions of people think a copy machine is a Xerox or a facial tissue is a Kleenex or a can of soda is a Coke. Just wait–it won’t be long until the team names in the end zones take up half the space they do now, with a sponsor name taking up the rest, or the uniforms the players wear are covered with advertisements. I’ll be more upset by that then a throw-in plug that may or may not have been an accident.

That’s it for me. Did you watch the game? What did you think?