As I type this, my heat is running and I can hear the sound of a plow scraping along the county road nearby–April is always exciting in upstate New York! We’re typically about a month behind on the onset of warm weather here (and, sadly, about a month ahead on the onset of autumn and winter) compared to where I grew up, so, in some ways, this is not unusual. The old phrase, “March comes in like a lion and goes out like a lamb” does not quite apply here. Still, even though it’s not unexpected, it is a little disheartening to find ourselves waking up to temperatures in the teens and having a couple of inches of snow on the ground. It shouldn’t last long, at least.

Okay. Griping about the weather is now over. Unless it’s still like this next week.

Inspired by a variety of bloggers, I decided to keep an actual list of books read for the year, because, why not? It’s sometimes interesting to look back and see a) how many books you read; and b) what they were. I tried doing this last year, but I got started so late that I couldn’t actually remember everything: “Did I read that this year, or last year? Hmm.” That sort of thing. So, in mid-January, I started a new document and listed what I’d read since the start of the year. Given that we’ve just now started the second quarter, I figured it’s a good time to share. So, here it is, my first quarter reading list for 2016: 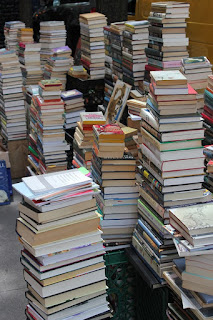 Waiting for the Barbarians, J.M. Coetzee (1980). Picked up from the Magpie’s pile of books she read in the fall semester. I liked it quite a bit. A very effective tale about “us and them,” and who’s worse?

Waiting for Godot, Samuel Beckett (1953). Waiting to understand it. I can honestly say I didn’t like it any better than when I read it in high school.

The Bone People, Keri Hulme (1984). STARTED, UNFINISHED. Third straight book picked up from the Magpie. I like the story, have gotten used to (mostly) the unusual writing style, but halfway into the book I find it really hard to see how this story can keep going in this vein for another 200+ pages. I’ll come back to it, I’m sure.

Great Expectations, Charles Dickens (1861). STARTED, UNFINISHED. Inspired in part by my re-read last year of The Cider House Rules, I started in on this (we had a copy floating around the house). I actually like it, but I’m kind of using it at this point as an “in between other books” read.

Avenue of Mysteries, John Irving (2015). I found this more enjoyable than his previous new book (In One Person), yet I’m starting to find Irving is becoming repetitive, and his main character has the appeal of a bowl of plain oatmeal. This was a disappointment.

11/22/1963, Stephen King (2011). Re-read in preparation for the TV version (which I think concludes tonight). Love this book. Maybe a little long (okay, a lot long), but it’s entertaining piece, and has quite a love story, something King does surprisingly well.

Deal: My Three Decades of Drumming, Dreams, and Drugs with the Grateful Dead, Bill Kreutzmann, with Benjy Eisen (2015). Breezy and laconic at the same time, and surprisingly little insight into one of the oddest rock and roll bands in history.

Lost Boy, Lost Girl, Peter Straub (2003). I read this in early March, and it’s already lost from my memory.

The Little Friend, Donna Tartt (2002). Far, far better, in my opinion, than Tartt’s much-hyped The Secret History. I’ve always liked adult books about kids–err, wait, that doesn’t sound quite right, does it?–and Tartt delivers a an effective child protagonist, along with a cast of interesting characters. I guess I’ll have to tackle The Goldfinch after all.

The Doll Maker, Richard Montanari (2014). As is my custom, I looked at the reviews after reading this, and I’m mystified why this mystery gets as much love as it does. The plot was a bit of a stretch and there were too many “Wait, what?” moments in here. Not a terrible book, but maybe needed a firmer hand editing? The good thing? I was interested enough to read to the end, and, though this is part of a series, it stands on its own.

So, there you have it. Eight books completed, two begun (actually, three; I’m on the verge of finishing something else). Looking at the list, I realize I need to read a little ‘newer’ than I have been. Part of the issue is that I do most of my reading from the library and I tend to wander in there and have no idea what I’m looking for.

Anyway, that’s it for me; what’s been in your reading pile lately?