Thoughts on the Brexit

The Brexit frightens me.

(In the unlikely event you have no idea what “Brexit” is, it’s the decision made by the United Kingdom last week to leave the European Union.)

What frightens me about the Brexit is not what it does to the stock market, or global trade, the value of the dollar compared to the pound, or the world economy in general. I admit to having little understanding of how all of that works, or how that impacts me on a daily basis. The Brexit may well be good for the UK in the long run, though I suspect it will not. But I’m no economist.

What frightens me is that it was a victory for racism and xenophobia. Much of the arguing over Brexit centered on the question of immigration. The UK has been hit over the last few years with a lot of immigrants from Poland and eastern Europe. And now, of course, there are all those Muslim trying to get in and turn the UK into the northwest corner of the caliphate. Pro-Brexiters like Nigel Farage skillfully played on the fears of UK citizens, with pro-“Leave” ads that bear a striking resemblance to Nazi propaganda (the black and white images are actual images from a Nazi film):

Much of the rhetoric from Farage’s UKIP (United Kingdom Independence Party) was about preserving jobs for real Brits, about protecting borders, about “taking back control of the country.”

Sounds a lot like what I’m hearing from a certain fur-bearing mammal on this side of the pond.

I’m not naive. Racism has always been a thing. It will always be a thing. We humans have a need to create divisions where they don’t exist, and to carve  them deeper where they do exist. I’ve come to believe (and maybe it’s because of my privileged position as a white, sort of middle class man) that it’s gotten better over the years, and maybe it has. But lately? It’s getting worse.

Some of it’s because of the economy. Bad times lead to finger pointing, and fingers are much easier to point at people who look and act different, who speak in funny languages, who come from other places. And some of it’s because of the times, which are troubled. But demonizing those people with the funny customs and clothes and accents is not the way to go. Pointing the anger and fear at one or two groups and releasing that pent up anger is a dangerous game to play, and it can all too easily end in some very bad places. 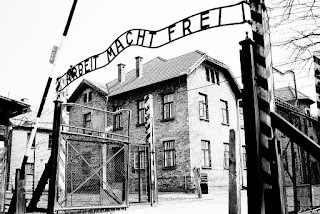 I’m hoping this is a blip, a hiccup, a momentary lapse of reason. And I hope we defeat it here.

Second image from Ministry of Foreign Affairs, Republic of Poland