I’ve been on a bit of a downer lately, what with posts on…well, never mind, no need to bring it all back up. If you’ve been reading along, you know what I mean, and if not, you can easily go back and look over the last couple of weeks of posts and see for yourself.

So–what’s been in my reading list these last three months? In order of finish (i.e., April through June):

Finders Keepers, Stephen King (2015). The second book in the “Mr. Mercedes trilogy.” I enjoyed this quite a bit. While it’s definitely King’s voice, I find his crime novels have a very different vibe. I also like the concept of this trilogy, as each book (so far; I haven’t yet read End of Watch) begins at the same place, then follows different victims of Mr. Mercedes years later.

The Big Rewind, Libby Cudmore (2016). Local author Cudmore invents a new genre, the “hipster cozy.” She starts with a great concept but I found the story wandered a bit and lost some steam as the book progressed.

The Water Knife, Paolo Bacigalupi (2015). I’m hoping this is not our future, ’cause it ain’t a happy one. Very good book, though.

The Shining, Stephen King (1977). Reread. Watched Kubrick’s film, decided to read this one again. It’s still good. And Kubrick made a fantastic-looking film, but he really missed the point of the story. 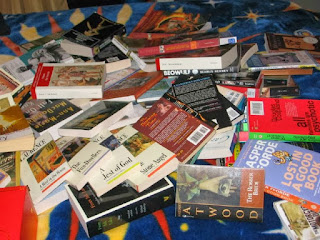 Light On Snow, Anita Shreve (1992). Did I say last time I love adult books with child protagonists? Yes. Yes, I did.

Bill Graham Presents: My Life Inside Rock And Out, Bill Graham and Robert Greenfield (1992). Graham died before he could complete his autobiography, so Greenfield structured it in an unusual way to great effect. Arguably the most famous rock and roll promoter in history tells his story, supplemented with interviews with family, friends, colleagues, rivals and the rock stars he worked with over 25 years in the music business.

All The King’s Men, Robert Penn Warren (1946). Reread. Gets better every time I read it. This is a Desert Island Book.

Welcome To Night Vale, Joseph Fink and Jeffrey Cranor (2015). A book based on a quirky podcast introduced to me by The Magpie, who loves it. I started this in the first quarter, put it down, then picked it up again. The uneven story eventually smoothed out and the book got better as it went along, but surrealism is not my thing.

Skeleton Crew, Stephen King, (1985). Reread (though I last read it so long ago it’s kind of like picking it up for the first time). Grabbed this when I was out of books to read. Some very good stories, some not so good, some feel really dated. Which is natural, I guess.

The Bone People, Keri Hulme (1983). Got through 200 pages or so back in January, then put it down. Suddenly found myself speeding through the middle third. A difficult book to read due to its structure, frequent use of Maori phrases (and stupid me didn’t discover the little glossary in the back until I was in the last hundred pages), and subject matter. I still can’t say for sure if I liked it as a whole or not.

So, 13 books for the quarter (21 for the year so far), not bad. Back in April I declared that I wanted to read “newer”–six of the 13 were published in 2015 or ’16, so mission accomplished there, and if inter-library loan comes through any time soon I’ll have four or five more books in that category by the end of the next quarter (my librarian here tells me, however, that librarians play fast and loose with the rules governing the movement of books, so I may be reading them in October). One thing I do notice here is that I have a high proportion of (presumably white) dudes on this list; I’d like to diversify my reading a bit. And maybe cut back on the King.

What have you been reading lately?