Who Is This For?

I may have mentioned in an earlier post that I was having trouble with my computer. Well, I’ve actually been having trouble with it for a couple of years, due to a damaged hard drive that, for some time, would cause complete system crashes–a rather inconvenient thing, to say the least. Those problems seemed to disappear over the last six or seven months, which was really nice, though it was always at the back of my head that I could crash anytime. I got in the habit of saving early and often, and of setting up AutoSave to go off every two minutes or something like that.

Of course, we all know that computers, like cars, don’t just fix themselves, and the hard drive was the least of my worries. My computer had a lot of stuff in it–by which I mean hard drives (two), optical drives (2), USB ports (more than you could shake a stick at)–and those things started disappearing. When I lost my speakers two years ago I thought it was something I had done; I had disabled them but then couldn’t enable them. Inconvenient, but no biggie: no one in the house really wanted to be subject to the barrage of Grateful Dead I listen to when I write, and I have since found headphones are more effective at blocking out distraction, and might actually be better for picking up nuance in music. As the month of August wore on, however, I realized that it probably wasn’t me failing to find the proper audio component in my Device Manager–it was my computer, slowly but surely dying.

My wife had bought an expansion drive some time ago with a universe of storage space on it and had been urging me to back up the hard drive. I had started this back when the crashes were occurring, but hadn’t finished. The last week in August I got on my horse and copied files, and it’s a good thing: the old computer had a couple of nights where it shut itself down, and each time I turned it back on, I noticed that, one by one, the various bits of hardware were disappearing from the list. Then one evening it wouldn’t turn on at all (not entirely true: fans spin and that’s about it). Meaning…

The day after Labor Day, the replacement arrived. It’s a sleek, cheap Dell that takes up about a third of the space the old tower filled. When it arrived, I wanted to put it up on my desk, alongside my monitor. That meant I needed to excavate my desk, which I did. Well, almost. I excavated about two-thirds of my desk–not my idea of fun, but necessary (and not complete; I hate cleaning up).

As I excavated, I found a lot of interesting things, which I will not go into much detail about, but I did find this, and if you’re a writer, you probably have some of this, too: 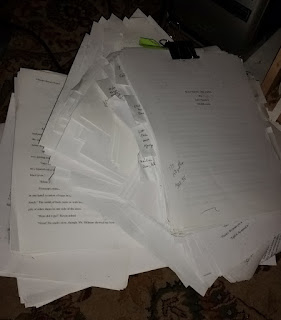 Yes, these are printed out manuscripts. On the top is my most recent epic, printed out this spring. You can see a bunch of sticky notes hanging off the side. Below that are actually more recent editions, from later in the editing process. Mixed in with the mess are parts of my last two manuscripts, along with notes and e-mails from beta readers.

In prepping my desk for the new computer, I filled a bag with garbage and a big cardboard box with recyclables. Perfect time to pitch the old manuscripts away, right? Well, that picture was taken this morning.

Last week, Katrina Lantz, writing at the blog Operation Awesome, embedded a vlog from writer Beth Revis (Across the Universe) on failure and success. In the video, Beth displayed a pile (actually, it might have been two piles) of manuscripts she had written before getting Across the Universe published. She mentioned, I believe, ten manuscripts, and you can bet she’s got all ten of them printed out and saved somewhere in her house. After seeing this video, and finding myself with a pile of three unpublished (but hopeful) manuscripts on the floor to my left, two weeks after cleaning up my desk, I have to ask: Who are we saving these for? And why?

I know the impulse that drives me to save drafts upon drafts on my computer. It’s the same one that makes me do a Save As… every time I make a major change to my manuscript, the same one that explains why I have 11 versions of my currently on submission project in various stages of completion on the computer: fear. Fear that something will go horribly wrong with the new version and I’ll have to go back to a previous version; fear that, if I don’t keep it, it will be lost forever should I need to go back, that I won’t be able to pull something out of my head again if needed.

But the pile of paper is different. Given the gazillion-gigabyte expansion drive, the cloud, the ability to e-mail myself or Agent Carrie the manuscript at any time as a safeguard, the pile of paper is completely unnecessary. So why do I do it? Why do we do it (since Beth Revis’ video shows I’m not alone in my manuscript hoarding)?

Fiction writers are historians, in a way, charting the lives of people and families who never existed, recording their histories in exacting detail. Maybe saving our drafts and notes is akin to preserving important documents: records of births and deaths, marriages and moves. Or maybe it’s just an ego thing: Or maybe it’s some sort of ego thing: we’re hoping to make it big, and we want to leave something to posterity. Here are my eyeglasses, here’s my coffee mug, here’s the marked-up first draft of my first mega-bestseller.

Wow, I’ve gone on much longer than I expected. So, what do you think? Are you a manuscript hoarder, and if so, why?