Well, well, it’s another sheet torn off the old wall calendar, and not just any month, but September. That means another quarter of the year gone, and that means it’s time for the reading report! If you want to see what else I’ve read this year, here’s Part I and Part II. But before we do that, let’s have a quick peek at the old American chestnut growing on my lawn. On the left is a picture taken earlier in the week: 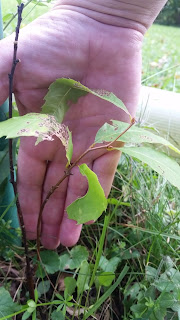 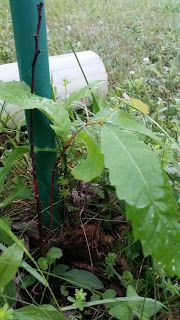 That picture on the right is a bit blurry, and lacks my hand for scale, but there was clearly a bit more growth put in between July and September. There won’t be much growth going on now; hopefully the tree to be will make it through the winter. And now, on to the reading list!

Hyperart: Thomasson, Genpei Akasegawa (2010). Read this one at the urging of the Magpie, and it was amusing. Started early in quarter 2, put it aside for a while, then finished it off. Some day, I’ll explain what a Thomasson is, but that day is not this one.

Born On A Tuesday, Elnathan John (2016). Strong debut novel about a young boy in Nigeria growing up among social and religious upheaval.

The Revenant: A Novel Of Revenge, Richard Punke (2002). I haven’t seen the movie yet, but I found the ending rather disappointing and a bit anti-climatic.

End Of Watch, Stephen King (2016). Though I thought the middle book (Finders Keepers) was the best, this was satisfying way to wrap up the Mr. Mercedes trilogy, though it did veer a bit off the straight up detective story formula of the first two.

Everybody’s Fool, Richard Russo (2016). Russo writes with tongue planted firmly in cheek, but I found this sequel lacked the warmth of the original.

Nobody’s Fool, Richard Russo (1993) Re-read because it was hanging around and I wanted to compare it with the above. Russo nails life in a down-at-the-heels upstate New York town, and the banter between protagonist Sully and his frenemy, Carl Roebuck is pitch-perfect. This could be a desert island book.

The Age of Miracles, Karen Thompson Walker (2012). The earth’s rotation begins to slow down, bringing unexpected, catastrophic changes. Very well done book, though I wasn’t entirely sure if I was reading an adult book with a young protagonist or a YA book. It crossed the line back and forth a few times.

The Stand, Stepehn King (1980). Re-read. Still enjoyable after all these years, but the cracks are beginning to show. Do women really refer to themselves as “Stu’s woman” or “Larry’s woman”?

Life After Life, Kate Atkinson (2013). Great concept of a woman living her life over and over again, but can best be summed up by this exchange late in the book: “What if we had the chance to do it again and again, until we finally did get it right? Wouldn’t that be wonderful?” “I think it would be exhausting.”

Middlesex, Jeffrey Eugenides (2002). A multi-generational epic that covers the Greek expulsion from Turkey, incest, the immigrant experience, and gender identity, and still manages to be entertaining.

Heat & Light, Jennifer Haigh (2016). Gas drilling comes to a small Pennsylvania town, changing everything. Overall good, but I think Haigh should have trimmed the cast of characters back and gone deeper than she did.

Thirteen books for the second quarter in a row, bringing my total for the year to 34. It’s funny, too, because I felt like there was a slowdown somewhere in there, but I guess not. I have succeeded in reading newer (5 books published this year). One of these days I’ll look at the diversity issue, too. But not today. That needs more space and time than what I’ve got right now. So–what’s on your reading list?