Well, technically it’s not a blizzard, but the storm that began yesterday has dumped close to a foot of snow on us (I measured 13″, but there was already a some on the ground; I’m not sure what the “official” totals are). I got out in the middle of the afternoon yesterday and shoveled about five inches or so out of my driveway, and pulled down a lot with my roof rake from a part of the house, then called it a day–moving snow is tiring, and now I’ve got more to do!

Officially, I’m “working from home” for the first couple of hours this morning. Unfortunately, I didn’t bring anything home with me on Friday! At the very least, I can sort through the fifty or sixty e-mails that have no doubt piled up since last week. It’s amazing how much junk e-mail there is in the world. What else is happening/has happened?

-Last Thursday, the wife, the Magpie and I went to a meeting of concerned citizens who are hoping to keep the momentum generated by our local women’s march going. I counted over 30 people crowded into a little upstairs room at a local restaurant–not bad for a night that also had pretty snowy conditions. It’s heartening to see so many people who will remain vigilant and active, and to know that there are at least two other similar groups in our rural county doing the same.

-On February 3, Representative Gaetz of Florida introduced HR 861–To terminate the Environmental Protection Agency. This has been referred to committee(s). My understanding, since the text of the bill has not been released, is that it would turn over environmental responsibilities to the state. Sorry, folks, this is a bad idea on many levels. Climate, Flint, and Hoosick Falls notwithstanding, our land, air and waters are probably in the best shape they’ve been in in my lifetime, and a lot of that has to do with the EPA (and the Clean Air Act, and the Clean Water Act). Check the committees, folks, and see if your representative is on one or more of them, and urge them to oppose this misguided act. I made this special for the occasion, feel free to use it: 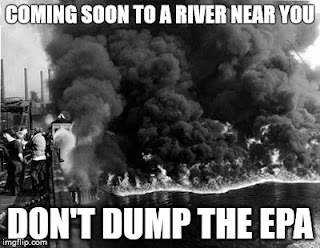 For the record, that’s the Cuyahoga River, which caught fire on several occasions in the last century. I should note that, while President Trump almost certainly will support this effort (he did say he wanted to get rid of “the Deparment of Environmental”), this comes right out of the GOP platform (see p. 21). Are we mired in regulation and bureaucracy? Maybe. Is this the best way to fix it? Not in my view.

-On a non-political note, the Boston Bruins finally dropped the axe on coach (er, former coach) Claude Julien’s neck last week, timing the announcement so that it would be lost in the hubub over the Patriots’ Super Bowl parade. I liked Claude quite a bit and didn’t think he should get tossed for the crime of keeping a poorly-constructed team barely in contention for a playoff spot. I doubt he will be unemployed long. To my surprise, the Bruins just ran off three straight wins under new coach Bruce “Butch” Cassidy. I’ll hope they can keep it up.

-The Bruins played (and beat) Montreal last night. The last time they played, Boston defenseman, Torey Krug hit Montreal’s Andrew Shaw with a borderline hit that left Shaw with a concussion that caused Shaw to miss 14 games (Krug caught Shaw’s chin with his shoulder on the hit, which can be seen here. I don’t believe it was an intentional hit to the head, but I am a Bruins fan!). Naturally, what happens in their first meeting? They fight. Most concussions in hockey don’t happen in fights, of course, they happen on hits like the one Krug laid on Shaw back in December, but they do happen, and guys who have already had one seem more likely to get another. The culture of hockey being what it is, however, Shaw pretty much had to challenge Krug, and Krug pretty much had to accept the challenge (never mind that he already did that back in the same game he knocked Shaw out of in December when he fought Brendan Gallagher). The older I get, the less convinced I am that fighting has a place in hockey.

That’s it for me, time to shovel. How are you all doing?