Hoo boy, that got your attention, didn’t it?

While Googling for images that would go with my spring break post from a couple of weeks back, I kept running across a recurring image: tucked in amongst the images of bodies packed on the beach, sea to shore, and bodies packed in bars, wall to wall, and overflowing garbage cans and puking, passed out individuals, was a meme, a wall of words that, until I read it, seemed out of place in a Google search for “spring break fort lauderdale” (or whatever it was; I can’t seem to duplicate it now): 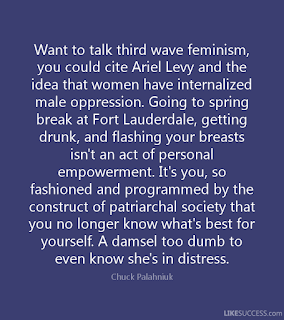 The quote in question comes from Palahniuk’s 2008 novel, Snuff. It struck me immediately in relation to the then ongoing brouhaha over Emma Watson’s breasts, which appeared (part of them, anyway) in a photograph that accompanied her interview in Vanity Fair a few weeks earlier (for Watson’s interview and to see the photo in question, go here).

The appearance of Miss Watson’s in the photographs caused a bit of a ruckus. Watson, of course, has become a leading voice in the current feminist movement. In 2014, she gave a wonderful address at the United Nations on gender equality, became the celebrity spokesperson for HeForShe, and is also the UN Women Goodwill Ambassador. She has been quite outspoken–intelligently outspoken–on equality issues for some time. No one could doubt her credentials as a feminist. That is, until that one photograph appeared.

One of the more widely-quoted digs came from Julia Hartley-Brewer, a British radio personality. “Emma Watson: feminism, feminism…gender wage gap…why oh why am I not taken seriously…feminism…oh, and here are my tits!”

Watson was a bit perplexed at the backlash, and handled it beautifully. (I am amazed, by the way, that Watson has not only been able to transcend her career-launching role as Hermione Granger; in many ways, she’s become Hermione Granger). Said Watson: “Feminism is about giving women choice. Feminism is not a stick with which to beat other women with. It’s about freedom, it’s about liberation, it’s about equality. I really don’t know what my tits have to do with it.” Well said.

And yet, Miss Watson should not have been so surprised at the reaction. Some of it undoubtedly comes from those who just don’t like her–haters gonna hate, and all that. But a lot of it is no doubt from those who fear feminism and the prospects of true equality for women. Those folks are lying in the weeds, no doubt waiting for any excuse to start bashing (and, I wonder if those are also the folks who are behind some of the celebrity phone hacking, hoping to get compromising pictures). They are happiest when women are kept down and just smile pretty for the camera.

Watson would no doubt say that her decision to do that particular photograph was just that: a decision. A choice. That it’s her body and she can display it–or not–however she wants. That her decision, her choice, makes this perfectly in keeping with feminism. I get that, and I agree. And yet, I can’t help wonder whether this helps or hurts women who are not in Watson’s position. Emma Watson, because of her role as Hermione Granger, and because she has turned out to be a pretty good actress, and because she is an extremely intelligent woman, has power, and has choice. I suspect, after her recent haul for Beauty and the Beast (reported at only $2 million up front, with a potential huge back end deal), Watson could probably decide to walk away from Hollywood forever. With her brains, she could almost certainly be successful in whatever she sets her mind to. With her bankroll, she could take the time to let whatever she chooses to do develop into success. That’s a lot of power. It gives her the opportunity to make choices, to be outspoken, and to not have to really worry about whether it pisses people off or not.

And that’s where things get sticky for me. Watson has the ability to choose. Is this a representation of power, as she might suggest, or is she just another damsel who doesn’t know she’s in distress, as Palahniuk suggests? And what of the women who don’t have that power? What of the women who are struggling to make it as actresses and models, who are told to take their clothes off for the camera–or, if they’re keeping some of them on, to pose like they want to fuck the camera? Are these women empowered, or are they exploited? And does Watson’s photo shoot help or hurt?

I would love to hear your thoughts on this.