Back at Christmas, I found a package under the tree for me from the Catbird that was the approximate size and shape of a deck of cards. When I picked it up, however, it was clear that it wasn’t a deck of cards. This felt a little heavier. Denser. And when I picked it up, things moved inside. Shifted. When shaken, the box sounded a little like a box of Good & Plenty or Tic Tacs.

It wasn’t candy, though. It was Story Cubes. Have you heard of them? I’m sure that, somewhere out there in this writing world I’ve immersed myself in, someone must have been talking about them on a blog, or Absolute Write, or somewhere, yet I can’t quite remember hearing about them before. Even though I couldn’t remember having heard about them before, I knew exactly what Story Cubes were, and how they worked, without really having to open the package (and I love the package, by the way; it’s a clever little box that looks to be quite sturdy). 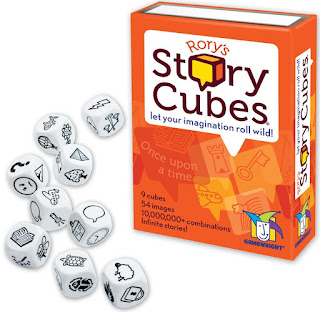 The idea behind Story Cubes is pretty simple. The box contains nine six-sided dice in the box, but instead of little pips for numbers, there are symbols, pictures. Throw the dice, look at the symbols that come up, and use those words in a story. That’s pretty much it right there. The Catbird suggested that I could use the cubes when and if I got stuck.

Now, anyone who’s been reading this space for a while may know that I’m not really big on the concept of writer’s block. My approach has been, when stuck, to keep banging my head against the wall. This is the best approach, most of the time (for me–your mileage may vary), though I do know there are also times when it’s best to get up and redirect the brain by taking a walk or a shower, doing the dishes, or vegging out in front of the television.

I confess, the Story Cubes sat unused for a long time. It’s not something I would use in the course of a normal writing session, where I already have a starting point from the last writing session, and my desk is too messy to use them, anyway. I’d either lose them in the mess or have them fall off all over the floor. Recently, however, I took them to my writing group. Normally, we start our writing group off with someone reading a short prompt, followed by free writing that’s supposed to be inspired by the prompt. I thought maybe we could use the Story Cubes as the prompt. Sounds like a perfect job for it, right?

The first time I brought them, no one else showed up. I knew this was a possibility and wasn’t overly upset–I had to go to town for some shopping anyway. This just meant I got done that much earlier and we had dinner at a normal time. When it was clear no one else was going to show, I gave the cubes a shake up, tossed them on the table. Here are the symbols that came up: question mark, flowers, airplane, beetle, eye, fire, cane, house, bridge. Five minutes later, I had this ‘story’ (cube words underlined; note, this is completely unedited, and, as I look at it now, really kind of silly):

“I questioned the pilot’s ability to fly this airplane. He lingered up the aisle, supported by a white cane, a heavyset, beetle-browed man with a lazy eye and a flower-child’s hair. But he said in a voice full of fire, ‘This is my house and I’ll brook no disagreement; follow my every order and this flight will be no more trouble than walking across a bridge.’ And he was right.”

Does it make much sense? No, not at all. Is it a story? Not exactly, but it could be the beginning of something. And at this point, I need to say something about Story Cubes: the makers offer no explanation for the symbols, for what they mean, and that’s a good thing. I used the question mark not as an object or a word, but as a concept (the narrator questions the pilot’s ability). Meanwhile, the six-legged creature on one of the cubes was anatomically accurate enough for my naturalist’s brain to call it a beetle; others might see it as ‘insect,’ ‘bug,’ ‘cootie’ or something more conceptual.

I did take the cubes back with me last week, and we used them again. I had a lot more trouble this time, scratching out another three paragraphs over forty minutes or so, nothing I’d care to share here (though I did manage a nice turn of phrase that maybe I’ll use for something else). The others enjoyed it and had better writing success than I.

All in all, the cubes are a lot of fun. I may not use them as a regular part of my writing routine, but I’ll keep them handy all the same, and I’ll keep bringing them to my writers’ group. Hey, you never know when they’ll help unlock something big.

Have you ever used Story Cubes or something like it? What did you think?