The National Hockey League playoffs are rolling along, more than halfway through round two. As I write this, eight teams have already been eliminated in the first round, one has been taken out of the second round, and another could be knocked out by ten thirty this evening. As always, the playoffs has provided drama, thrills and controversy in equal measure, heroes and goats, and further proof that no one really seems to know what goaltender interference is.
My own Bruins went down in the first round, losing to Ottawa in six games, which means I can actually enjoy watching the games for a change (playoff hockey is probably the most excruciatingly exhilarating thing in the sports world. It’s only when you don’t have a dog in the fight that you can truly appreciate the game as a game.). Still, it’s always more interesting when you’re rooting for someone; I just need to figure out who. With that in mind, I’ll list out the remaining teams, and some pros and cons of rooting for them. Maybe by the time I’m done, I’ll know who to root for.
Anaheim Ducks
Pros: Well, uh, there’s…hmm. Can I come back to this?
Cons: Ryan Kesler. Ryan Getzlaf. Corey Perry. The fact that the team, originally owned by Disney, was actually named after a movie franchise. Coach Randy Carlyle reminds me an awful lot of Dean Wormer. Maybe that’s a pro?

Pros, part deux: Honestly, I still got nothing. As far as I can tell, the Ducks have no redeeming qualities at all. That was easy!
Edmonton Oilers
Pros: A Canadian team hasn’t won the Stanley Cup since 1993. They practically invented the game, for God’s sakes. Let ’em have one.
Cons: They switched to those awful orange jerseys. That’s unforgivable. Sportscasters on Hockey Night in Canada insist on calling Ryan Nugent-Hopkins ‘RNH.’
Nashville Predators
Pros: A Cup victory for P.K. Subban will give the management of the Montreal Canadiens an ulcer the size of Tycho. As a Bruins fan, anything that does that is fine by me (and I like Subban, now that he’s not on Montreal anymore).
Cons: With 46 games played for the Predators, it’s possible that Mike Ribeiro gets his name on the Cup.
New York Rangers
Pros: A win means they can finally stop talking about Mark Messier and 1994. They were my Dad’s favorite team, and I have a lot of friends and family who would be really happy if they won. Mats Zuccarello would be the first hobbit to get his name engraved on the Stanley Cup.
Cons: New Yorkers are insufferable when their teams win championships. A deep playoff run means having to look at an ever-increasing number of bandwagon celebrities in the Madison Square Garden crowd.
Ottawa Senators
Pros: See Oilers, Edmonton. Also, the original Ottawa Senators won 11 Stanley Cups in the NHL’s early days before moving to St. Louis and folding in 1935. As such, the Senators, who rejoined the NHL in 1992, would be the first “Zombie Team” to win the Cup. That’d be kind of cool. And we’d get two more rounds of Coach Guy Boucher doing stuff like this:

Cons: The Senators have a bunch of sneaky-dirty guys who are jerks. And not just because they eliminated the Bruins. Since the NHL is a league of copycats, a Senators Cup win might set the NHL back about 20 years, as everyone decides to employ a boring system with a bunch of marginally-talented players. We’d have two more rounds of Guy Boucher, and frankly, Guy Boucher scares the bejeebus out of me: 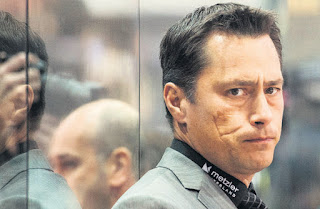 Pittsburgh Penguins
Pros: There hasn’t been a back-to-back Cup champion since Detroit in 97 and 98; it’s time we had one. A second consecutive Cup for Phil Kessel would be a giant “FU” to the Boston media who savaged him when he left the Bruins and might earn him some of the respect he deserves.
Cons: A third championship for Sidney Crosby would make listening to NBC coverage of the Penguins even more insufferable than it is now–and it’s pretty insufferable.
Washington Capitals
Pros: A win for the Caps might just shut up some of the unfair criticism directed at Alex Ovechkin, who has only scored more goals by a long shot than anyone else since he entered the league. It would also mean Justin Williams is still perfect in his career in game 7s. They have a guy named Beagle–who doesn’t like a beagle?
Cons: I still hate Braden Holtby for almost single-handedly knocking out the Bruins in 2012. Tom Wilson is a dangerous player who needs to stop leaping into hits. I’m not real happy with anything from Washington these days.
The verdict
Well, that was very helpful. As expected, writing all this out has helped me figure this out. So, who do I want to win the Stanley Cup now that the Bruins are out? Well, um…err…Bruins in 2018!
Can you root for anyone when your favorite team is out of the playoffs? How do you decide?