Waking up once again exhausted and unprepared for Monday. It’s been that kind of a spring, and the weather hasn’t helped much, with a lot of rain and colder temperatures than normal. Our little corner of upstate is normally a couple of weeks behind the weather I was used to growing up on Long Island, so the “lion” typically makes it’s entrance around the second week of the month (which, this year, was when the big lake in our county finally froze all the way over for the first time, followed by three feet of snow); likewise, the April showers and May flowers are similarly late. This year, however, the April showers seem to have been saved for this past weekend.

The weekend started for me on Friday afternoon/evening, where we were, fortunately,  blessed with good weather, for the dedication of a boat wash station. What’s a boat wash station, you ask? Exactly what it sounds like. It allows boaters to use a high pressure, hot water spray to clean off their boats before launching into a water body, and to clean off their boats before leaving one lake for another. The purpose is to help prevent the spread of aquatic invasive species. My organization worked with another non-profit and a local government to get funding for the construction of this boat wash, so I got to make remarks on behalf of my organization. We had about forty people on hand, which was not surprising. The man the boat wash was named after was just one of those people, the kind who left people smiling, the one who devoted himself to making his community a better place. My comments focused on the fact that, though I didn’t know this man well, he always treated me like an old friend. It was a nice event, and a very fitting tribute to a good man.

On Saturday I wore a different hat at another event. This time, I was wearing my ‘member of the Audubon Society’ hat (and, perhaps more important, my ‘spouse of an Audubon Society co-president’ hat) at a bird festival event at a state park. This was the first bird festival for this park, and the weather was not at all cooperative, with rain throughout the day no doubt holding down attendance. The good thing is the parks people had put up several tents a few days in advance of the event, so it was relatively dry beneath (though the ground was quite wet; chairs would sink an inch or two into the soft ground when you sat on them). Not a whole lot of people came out, but the people who did were enthusiastic and very nice. And, I got to see an old friend: 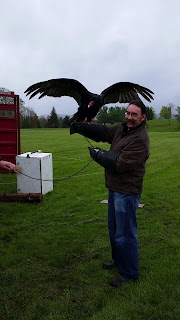 Yes, that’s Morty the turkey vulture. For those of you who don’t know, my wife and I ran an environmental education business for a number of years; ‘Morty’ was (is) a permanently-injured bird we had in our care and used for programs. When we ceased operation, we transferred him and several other birds to a group in the region. I’m happy to say that Morty is this man’s star attraction, and he very kindly let me hold him for a few minutes. Did Morty remember me? Hard to say. He didn’t bite me, and he didn’t puke on me, even though my bird handling skills aren’t what they used to be. It was a nice visit, and good to see Morty doing so well and in good hands.

On Sunday, we watched Prometheus, which was a sort of prequel to Alien. I was not impressed. I think they tried to pack a lot of meaning into the story, but characters were poorly developed and behaved in ways that didn’t make a lot of sense, the dialogue was terrible, and everything felt kind of rushed. Ah, well.

That’s it for me for this week. How was your weekend?