When I was a kid, I loved to draw. I drew pictures every chance I got, and I was told by some tat I was pretty good at it, though in hindsight, I think I heard that mostly from my mother, so maybe I wasn’t that good. Somewhere along the line, I stopped. When did I stop? More important, why did I stop? Drawing was something I enjoyed, though I can also remember ripping my paper to shreds, or scribbling out something so hard it tore jagged lines through the paper, and being so frustrated that the picture wasn’t coming out the way I wanted it that it drove me to tears. Maybe that’s why I stopped.

During the brief period where I liked to draw, I had no trouble sharing my work. I’d show it to my parents, my friends and classmates, my teachers. They could look at it when it was finished, but one thing I could not handle was having anyone watch me while I drew. I’d encircle my paper with my arms, hunched over like a hawk protecting its prey, nose nearly touching the paper. If I knew someone was trying to look over my shoulder, I’d stop. I just did not want anyone watching me do this.

Writing in public is different. I’ve written in public before. Sat down with my notebook and pen in coffee shops, on park benches in parks and right on Main Street. It’s never bothered me to do it. Several years ago, I occupied a table in the back of a coffee shop for an hour or so every Tuesday evening for three months while the Magpie took a course at a local college. Maybe it was because I had a story I was working on, but I could shut out the conversations, the people passing by with their steaming lattes and overpriced pastries and it didn’t bother me that people might scoff at me, the emobdiment of the “writing in a coffeshop” cliché. It never occurred to me that anyone would really even look at me–why would they?

Yesterday, my writing group met in a local coffeeshop instead of in our usual place, and it was different.  Awkward. Uncomfortable. Neither of us wrote particularly well, and he skipped both the out loud reading of a prompt and the out loud reading of our work, and I’m not sure why. Maybe it was the size of the table, which was far smaller than the ones we usually write at in our usual meeting location, small enough that we had to cock our notebooks at angles so they could fit without overlapping, small enough that, if we had both bent over to protect our work, our heads would have cracked together. Maybe it was the fact that this is a very local sort of space, where we were more likely to encounter people we know. But I almost think the reason is this: no one really  gives a single person writing in a coffeeshop a second glance. But two people? Two people writing in a coffeeshop is different. Unusual. Who writes together, after all? Two people writing together is enough to attract attention, while not being large enough to confer anonymity through mass. At any rate, when we were done, I think it was with a shared sense of relief as much as satisfaction.

I’m curious if any of you have experienced this. Do you write in public, and does it bother you? Does it make a difference if you’re alone or in a group?

One other update for the week: On Satuday, I cut the grass, and stopped by to take a look at our old friend, the American chestnut tree. Here’s how it looks. 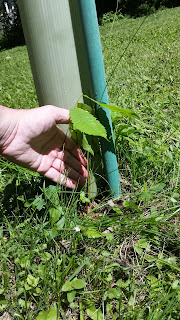 Not a bad start! See you next time!