Well, we’ve hit the penultimate weekend of ‘official’ summer and already we’re seeing the signs of the winding down of the season: one of the big baseball camps in the area is already empty, already moving in the bulldozers and heavy equipment for what will almost certainly be another expansion. The big camp is still open, still fielding teams, but at this point, the big crush of traffic ‘in town’ should start easing off, at least during the week. I have a village parking pass that allows me to park almost anywhere without having to feed the meters, but what good does it do when there’s nowhere to actually park? Well, that headache is about to go away for about nine months or so.

THE BIG EVENT last week was the eclipse. Did you see it where you were? I’m happy to say, the eclipse glasses worked. I got to see the eclipse (partial only, alas), and I got to keep my vision! It was not a productive afternoon. Round here, we saw a slight ‘dimming’ of the day, a slight change in the color, but it didn’t get dark.

SOMETHING I FOUND AMUSING If you read my newspaper column I linked last week, I recalled how, as a child, I was terrified of going out on a day we had an eclipse, lest I accidentally look at the sun and go blind. There’s a family that lives on the property where I work, with two small children. The kids’ mother also babysits other children from time to time (including my bosses’ kids). It was a hot day, and they were all going swimming, but the kids wanted to swim at the gym instead of the lake because they wanted to be inside. At one point, they came over to the office after the eclipse started: all of them with their eyes glued to the ground, all of them making sun visors out of their hands. I guess it’s good to know that kids do listen! We did let them use the eclipse glasses, and they were blown away.

THE CATBIRD flew back to school this weekend (actually, we drove her). The house goes a little quieter.

ACTUAL REWRITING has now officially commenced on the RiP which means, naturally, I had a moment of inspiration on the WiP yesterday. I may have to put an actual door on that back room.

CHESTNUT It’s been a while since I posted a picture of my favorite little tree, so I ran out across the desperately-needs-to-get-cut front lawn and took a picture. I need new glasses–can’t see close up well enough to take a decent photo most times (I’ve always had horrendously bad distance vision; now I can’t see up close, either). This is what it looks like today: 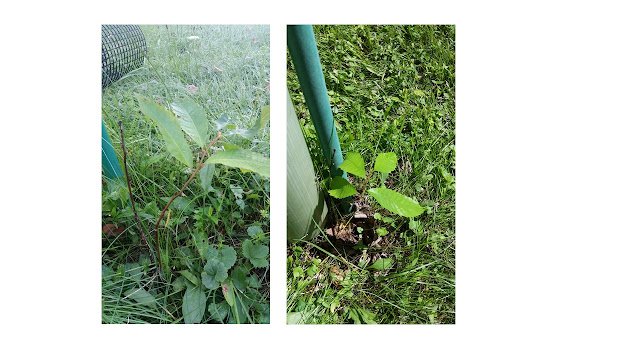 It’s not the greatest photo. On the left is the chestnut today. On the right is how it looked at the beginning of June. Hard to tell from this image, but it is definitely bigger, and while the new main stem is leaning a little, it has actually grown to the point where it is taller than that original main stem (seen on the left side of the leftern picture).

FINALLY some music. What made me look up this song late last week? I’m really not sure. It is a rather disturbing piece, but what the heck. Ladies and gentlemen, Ballad of a Thin Man, by Bob Dylan. Enjoy the day, enjoy your week, let me know what’s going on!

Bob Dylan – The Ballad of a Thin Man from Vasco Cavalcante on Vimeo.