Greetings, all. Woke up this day to a welcome sight: the mercury in our outdoor thermometer was above zero, which it hasn’t been before sunrise in close to a week. Not that you can feel it, mind you; took the dog out and was surprised at how cold it felt, courtesy of a decent breeze coming up the hill. But I’m buoyed by high temperatures that, by Wednesday, are supposed to be pushing fifty. Unseasonably warm, as they say. I wonder if all the folks who have spent the last week sneering, “So much for global warming” will apply that same (flawed) logic to this week, or if they’ll suddenly (correctly) say, “Don’t confuse climate and weather.”

I’m equipped to deal with this weather. This Christmas, I got a new hat to replace one I got probably our first Christmas in this house, since the fur was kind of falling out of the old one. When I put the hat on on Christmas morning, the Catbird said I looked like Vlad the Impaler. I’m not sure how I should take that. 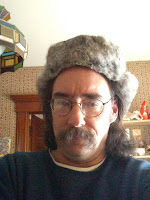 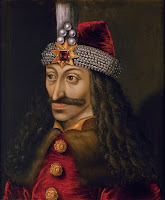 “And who knows which is which, and who is who?”*

While I don’t generally make resolutions (and didn’t this year), I did want to get better about setting up blog posts ahead of time. When I expected to be done with the WiP by Christmas, I thought I’d be able to use writing time that week to get a head start on 2018 posts. Problem: I didn’t get done with the WiP by Christmas, or by New Year’s. In fact, I didn’t get done with the WiP until this weekend (Yay, me!), though there are a couple of things bugging in the back of my head about the WiP, so I might need to go back and make some more changes before setting it sailing off to the Wonderful World of Betas. Back to the blog, though: I did start working on a post for today, but I fizzled out. Figuring I had enough of a base to be able to write on the fly this morning, I left it last night, but the brain power is a little low this morning, so you’re getting yet another of these generic update posts. Maybe next week.

Last night, something unexpected appeared in my Facebook feed, a grant opportunity for New York state artists. They call it a fellowship, but it’s basically a grant. No age requirements, no “Must have been/must not have been published” requirements, no requirement that you spend the money on an expensive retreat in the woods or anything. I can do this! It doesn’t necessarily get me published, but it could get me a chunk of money ($7000), and that would certainly be nice and supportive. Deadline is January 24, so if you are living in the great state of New York and you’re an artist, look into it, and good luck! Many of you live in other states (if not other countries!), but I expect your state (or province, or country) has something similar. Ever apply for one? Ever win one?

Time for some music. Haven’t  done this in a while. Bob Weir wrote a lot of weird songs with strange time signatures. This is one (two?) of them, written in 7/4 time. John Perry Barlow, Weir’s primary songwriting partner, wrote a lot of songs about obsessive love–though when it comes to the point of obsession, you can argue that it’s no longer love. “Lazy Lightning/Supplication,” as performed at San Bernardino in January, 1978, will either wake you up or put you to sleep. Have a great week, all!


*From “Us and Them” by Roger Waters and Rick Wright