True confession time: My wife and I haven’t been current with a TV show since about the time Seinfeld went off the air twenty years ago. Up until then, the Magpie (and then the Catbird) was small enough to go to be at some ridiculous hour like 7 or 7:30, giving us time to actually watch prime time TV. When the girls got older and extended their waking hours, we didn’t fill it by watching TV. We read and played games with them, baths, and so on. Later, TV was lost by going to school concerts, ferrying kids to plays and rehearsals, sports, friends, etc. The absolute death knell for current TV came when we decided to drop cable in favor of Netflix. Cable had gotten way too expensive and we only watched maybe four or five of the hundreds of channels at our disposal, so it seemed kind of pointless to keep.

This meant we missed things, of course, or that we saw things, but after everyone else. We watched The Sopranos several years after the show famously cut to black. We watched Breaking Bad and Walking Dead about a season behind, since Netflix wouldn’t show last year’s episodes until right before this year’s episodes were due to air. It meant I had to try to recognize potential spoilers in Facebook without seeing enough to actually spoil me.

One of the shows I was aware of on the air that I might have liked to watch “in real time” was Parks and Recreation, mainly because I always liked Amy Poehler. It started its run while we still had cable, but got swallowed up by life and World of Warcraft. People would talk about it, tell me how good it was, but one thing I heard from several people: it starts slow. You have to give it about half a season.

A couple of years ago, I was alone in the house for a weekend, was in between writing projects, and hockey season was over, so I fired up Netflix and watched the first two episodes. I was not impressed, but decided to push on because the show reputedly got good halfway through Season One, and Season One was only six episodes long. I was still unimpressed. One chuckle per episode is not enough; who’s got time for an unfunny comedy?

Several months later, I went back and finished Season One and started Season Two (Boredom is a powerful thing). And then? It clicked. I can’t say whether it was the actors more fully inhabiting their characters, or the writing getting better, or that it was like hearing a crappy song that you hate over and over again on the radio until you’re singing along like you’re one of the band (okay, it wasn’t that), but the show got good, and I watched it fairly regularly, and just finished the series over the weekend. Plain and simple, it was a quality TV show. But oh, that slow start!

Slow starts are not something writers can generally afford. TV shows can generally get away with a slow start. Some big hits start out with humble beginnings, it’s really a matter of generating buzz and keeping advertisers and network executives at bay until that buzz brings viewers. A book, on the other hand? Slow starts are tough to overcome. It’s amazing to me in some ways that I sat through probably about four hours of TV programming time until Parks and Recreation “got good”–one the other hand, I don’t think I’d sit and read a bad book for four hours.

What’s made me think of all this is I got feedback from two beta readers on my latest manuscript, a manuscript I have very high hopes for. The feedback was good; the news? Not so much. One of them noted that they did not feel particularly invested in things until about 40% of the way in. Forty percent! That’s almost half the manuscript! The other said they read the last third or so “like my hair was on fire and the only way to put it out was to get to the end” (I love that!). The problem? The first two thirds. Ouch.

I have long known that I have a tendency to write stories with long, slow, ramp-up times. Writing coaches fill blogs and books with fun little graphs of story structure that look like mountain ranges full of foothills, peaks, valleys and gorges, to show how you should build your story. They look more or less like this: 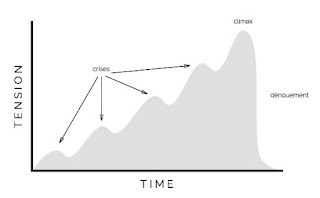 Mine? It looks more like a wheelchair ramp on the side of a government building, and that’s not good enough.

TV by it’s nature is a passive activity. You sit. You watch. You react (or not). Books, however, are different. Though you are sitting, you are actively engaged. A TV show can get away with a bad start. A bad start for a novel is generally death, unless you have very patient readers. (Some are. I just finished Barabara Kingsolver’s 2012 novel, Flight Behavior. It took me three attempts over as many reading sessions to get past page 10, but was worth it in the end.)

The good news for me is I’ve got feedback, I’ve got my manuscript, and now I’ve got the opportunity to make that ramp shorter, steeper, and more bumpy. On to revisions!

THIS AND THAT:
*Weather, vacation, and working too many weekends meant that I finally got to mow my lawn this weekend, about a month later than I would normally get the first cutting, and at least two weeks after it should have been done this year. It gave me the excuse to go look at my chestnut tree, and it’s potentially taking off: 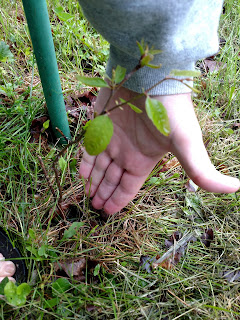 OK, so I got new glasses, but apparently my photo skills just plain suck. I took my first photo of the year on Friday (even worse than this), and this one this morning. The tree has definitely grown between Friday and today.

*With my favorite team out of the NHL playoffs, I was kind of rooting for Winnipeg, but they crapped the bed against Vegas. I do not want an expansion team winning the championship, but I really dislike the idea of the second coming of Raffi Torres (i.e., Washington’s Tom Wilson) winning, and I still hold a grudge against Braden Holtby for 2012. On the other hand, I would really like to see Alex Ovechkin win so that it would shut up the whole “selfish player, bad leader, shrinks in the big moment” narrative that, for many people, is really a result of the whole “enigmatic Russian” bullshit. Plus, if Ovechkin wins, maybe we’ll get a new commercial featuring the Ovech-head in the bowl of the Stanley Cup!

*F&$%@^g Windows! A recent update by Microsoft totally borked our home network. The problem? All my writing is on an external hard drive attached to my wife’s computer–and that drive (the whole network) became inaccessible. After banging my head for hours, I think I’ve finally figured it out. If you’re having similar problems (and if you’re a Windows 10 user, you almost certainly are), what helps is to not just search stuff like “Windows update killed my network” or “can’t access network after Windows update.” Find the actual update/build number. This last one was 1803, and the article that helped me was found here. Good luck.