First, let’s get something straight: I don’t follow fashion. I don’t care what the stars wear. And on the occasions when I happen to see snippets from the runways at Fashion Week, my reaction is usually along the lines of, “Who in their right mind would wear that?” (the answer, of course, is pretty much “Nobody except the models at Fashion Week.”)

And then Melania Trump wore that jacket. Well, this one: 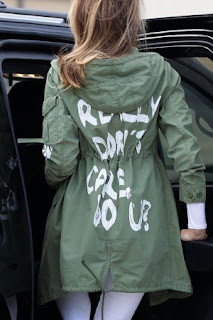 In case you haven’t been paying attention, it says on the back “I really don’t care, do you?” and she did not write it herself, it is a designer jacket, and sales are likely to shoot through the roof.

This jacket would raise eyebrows if the First Lady wore it while strolling around the White House grounds on a lazy Sunday afternoon. It would raise eyebrows if she casually draped it over the back of her chair while sipping tea in the Rose Garden. In those settings, itwould raise eyebrows and draw jokes like the one Trevor Noah of The Daily Show made: “It is kind of sweet she made a jacket out of her and Donald’s wedding vows.” But she didn’t wear it in those situations; she wore it while boarding Air Force One last week to travel to Texas, where she visited a detention center for children separated from their families for illegally crossing the border.

Now, it’s good that Melania Trump visited these centers. More of our politicians should go and see what the President’s “Zero Tolerance” for illegal border crossings has wrought. Maybe then they would do something substantial instead of just sniping back and forth across the aisle. And maybe Melania saw and heard things there beyond what was released in the highly-staged photo opp, something that she would take back to Washington, something that would enable her to push her husband into doing something thoughtful, something humane, something not written by Stephen Miller. I applaud her for making the trip, and for apparently wielding some sort of influence in the President’s order of last week that reversed his policy.

To her credit, the First Lady did not wear the jacket when she got off Air Force One in Texas, and she did not wear it when she toured the detention center, but she did wear it when she got off Air Force One on her return to Washington. Why did she select it? Maybe she just likes the way it looks (if you remove the awful lettering, it’s actually a pretty sharp looking jacket). Maybe it was just the right weight for dealing with over-enthusiastic airplane air conditioning. Maybe it was her way of saying the trip was just for show, or was her way of trolling her husband, or her way of trolling the news media, as the President insists.

We will likely never know what she meant when she selected that jacket, but it is (Dare we say it? We do, we do) feckless of her, her staff, and Fox and Friends to insist it doesn’t mean anything. Words matter, people. Image matters. And when you’re the First Lady of the United States, you have to pay close attention not just to what you say, but what you wear and the images you project, because even if it doesn’t mean anything to you, it means something to someone else.

Unless you just really don’t care.