Back in early August, I found myself home alone for an extended weekend, due to a work requirement that coincided with a family event. Sunday afternoon found me too physically tired to mow the lawn or do much around the house, and too brain dead to write or read; I reached for the TV remote instead–and soon found myself rewatching Breaking Bad.

I know a lot of people will say, “Why rewatch some TV show when there’s so much good, new programming out there?” Indeed, there are only so many hours in a day, week, month, life; why spend it watching something you’ve already seen, especially something that takes so much time? (Breaking Bad ran for five seasons, 62 episodes, roughly 50 minutes per episode. I hate doing math that shows how much time I’ve spent on something, just as I hated looking at the “Time Played” counter on my World of Warcraft characters.)  Yet I regularly seek out the comfort of previous experience when choosing my television, film and reading material. Earlier this year, I finished a re-read of Robert Penn Warren’s All the King’s Men, and I’m currently re-reading It for seemingly the thousandth time. There’s a good bet that, some time in the next year or so, I’ll pick up either A Prayer for Owen Meany or Empire Falls again, too, even though  there are literally thousands of books I haven’t read before coming out each year. Often, I’ll just grab something familiar off the shelf when I’m in between new books, though sometimes I just get a real strong urge to read an old book once more (It came about in part because we watched last year’s movie version, which was actually pretty good).

As a writer, there’s great benefit in following those familiar paths. Watching the first few episodes of Breaking Bad, however, I found myself really viewing Walter’s and Jesse’s actions against the context of what those characters become as the series goes on. It’s especially fascinating to see the breadcrumbs being dropped by the showrunners. One of the central questions of the show was who is the true Walter White? The mild-mannered, bumbling high school chemistry teacher, or the ruthless Heisenberg? I don’t think I started asking that question until more than halfway through the series on my first run through; now, I’ve been looking for it since episode one, watching for clues, and I think “Walter White” may have been the mask worn by “Heisenberg” for fifty years. By the end of season two, which is where I am now, that certainly seems to be more than a slim chance. 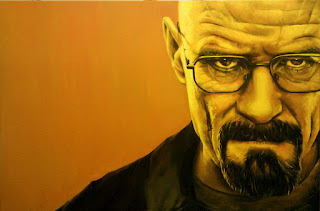 Interestingly, I find I interact differently with books when I re-read them than I do with movies or TV. I suspect it has to do with the difference in impact images make on your brain than words, or that reading engages the mind in a different way. I will sometimes pick up something as foreshadowing, or the first appearance of a motif in the work, but for me, re-reading a book is much more like reading it for the first time than watching TV or a movie.

How about you? Do you experience TV, movies and books differently the second (or third) time around? Do  tell!B