Monty Python’s Flying Circus once featured a skit in which a well-dressed, professional looking young man named Ken (Eric Idle) returns to the home of his parents, where he receives a warm welcome from his mother (Terry Jones), but hostility from his father (Graham Chapman). What starts out looking like a tale of a college boy coming home to his working-class parents is quickly turned on its head, as Ken is a coal miner, while his father is an award-winning playwright and novelist. “There’s nowt wrong with gala luncheons, lad!” sneers the father. “I’ve had more gala luncheons than you’ve had hot dinners!” The father suffers an attack of writer’s cramp and kicks his disgrace of a son out, and then–the punch line: “I think there’s a play there!” 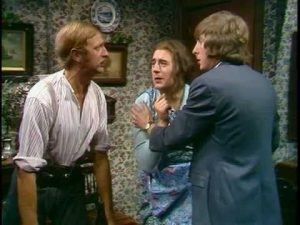 It’s the blessing and the curse of writers to see ‘the play there’ in all kinds of situations. A few years back, while driving through a hurricane to pick the Magpie up at a friend’s house, I watched a normally placid creek boil through a culvert, and I asked myself, “What if I couldn’t get to the house to pick the Magpie up?” This question was followed by opposite, but equally compelling thoughts: “That would be horrible!” and “Ooh, that might make a good story!”

Since I was actually able to pick up the Magpie and get her home safely, it was a case of ‘no harm, no foul’ and I was able to let my imagination run wild over the scenario I had imagined. And it was a good story. But sometimes, it’s not always ‘no harm, no foul.’ One of the first ideas I ever had, though one I did not see to completion, as I wasn’t seriously writing then, came about after hearing about two different, but related stories: one was a radio interview with the director of the Southern Poverty Law Center about the rise of hate groups, and the other was a particularly chilling story of a midwestern militia group that was planning on killing a state trooper, then ambushing the funeral. Pretty horrible stuff, but potentially the basis of a good story (and one that keeps coming back to me).

At the end of last week, I learned that a local man, someone I know through the school system, someone who was the Catbird’s track coach for two years in middle school, someone about whom I would say, “He’s a good guy!” was accused of a pretty nasty crime. You don’t want to believe it when it’s someone you know, when it’s someone you think of as “a good guy.” Hoping that it was some kind of mistake or misunderstanding, I found the criminal complaint attached to an online story. Innocent until proven guilty, yes, but this seemed pretty damning, and disgusting. And yet.

And yet, even in all of that, I find that Monty Python punch line coming back to me. “I think there’s a play there!” There is, of course. There’s a story there, in this man’s crime; in its impact on his family, on the community. There’s also the story of the victims, and the detective who discovered it. I don’t know if I’d ever use this local man’s crime as the basis of a story or not. It might never feel right, either due to the nature of the crime or because it’s too close to home, but the story’s there, just as there’s a story in pretty much everything we see around us: the mother and child at the bus stop. The old woman who meticulously rakes her lawn every morning. The fender bender at the gas station. There’s a story there. In fact, there are myriad stories in every instance, it’s just a matter of which part of it we choose to tell.