Twenty-two years ago, the National Hockey League’s broadcasting partner, Fox, broke out a technology that would revolutionize the game. After much work with the league to be sure puck integrity wasn’t harmed, a micro-chip was embedded in the puck, allowing the puck’s speed and (almost) exact path to be tracked; further, it allowed the guys in the control room to add effects: a hazy blue glow, a trail, a comet trail. This was FoxTrax. Or, as it has come to be known, Glow Puck.

The idea behind FoxTrax was, I guess, a good one. One of the chief complaints leveled against hockey since pretty much forever is that it’s hard to follow the puck on TV. It moves too fast! It’s too small! There are too many players! In truth, I can kind of understand this, and I try to be understanding. Just because have no problem following the action doesn’t mean it’s easy, it just means I’ve been doing it for as long as I can remember; I grew up in a hockey family, after all. Surely, this revolutionary technology would bring new fans flocking to the game?

Well, it was panned by hockey fans, anyway. Frankly, it looked stupid, added clutter, and was a distraction. Instead of being able to follow the wider play, the Glow Puck made it hard to watch anything BUT the puck. It reduced the game to a cartoon, or a video game. And it didn’t lead to new fans flocking to the game. After Fox lost the broadcast rights to the NHL, the Glow Puck faded away, never to return (sadly, the other Fox innovation, the 18-minute intermission which merely allowed for three extra minutes of commercials, didn’t).

And now it’s back.

This weekend, the NHL introduced its much ballyhooed player tracking technology. Pucks and player shoulder pads have a chip embedded in them that allow sensors to know exactly where everything is on the ice at all times, how far apart players are, how fast everything is moving–and will allow the wonks in the control room to add effects: a blue trail to the puck, lines connecting players, bubbles over the players’ heads. It will revolutionize the game, and bring in new fans by the thousands! 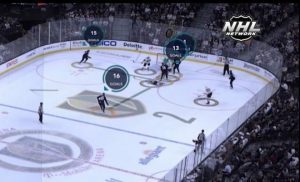 The funny thing about some of this, of course, is that it’s less necessary than it was 22 years ago. We’re living in the age of high definition television, where everything is rendered in exquisite detail. My smart phone has a better picture than the TV set I watched the 1996 All Star game on! We don’t need puck trails, we can see it now! What we might need is better arena lighting and better camera angles, not more graphics.

Maybe this is just me being a cranky old man yelling “Get off my lawn!” at the clouds. Maybe the League and its broadcast partners will employ this judiciously, or make it available on special, ‘enhanced broadcasts’  that you can pay extra for (hah, I might pay extra to get rid of it!). Maybe I’ll get used to it, the way I’ve gotten used to advertisements on the boards, and all players wearing helmets and visors. Time will tell.